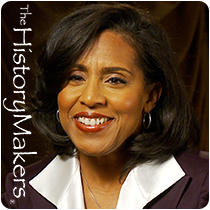 See how Andrea Meigs is related to other HistoryMakers
Donate Now

Talent agent Andrea Nelson Meigs was born on October 30, 1968 in Bellflower, California. Her father, David Nelson Jr., was a principal in the Los Angeles Unified School District; her mother, Dorothy Nelson, a college professor. Meigs spent her early childhood in the Compton area of Los Angeles and attended a private Christian school before entering the public school system in the fifth grade. After graduating from high school in in Palos Verdes, Meigs enrolled in Tufts University and graduated with her B.A. degree in English and Spanish in 1990. While there, she studied at Spelman College in Atlanta, Georgia as well as the Universidad Autónoma de Madrid in Madrid, Spain. Meigs went on to earn her J.D. degree in entertainment law from the Duke University School of Law in Durham, North Carolina in 1994.

In 1994, Meigs was hired to work with Congresswoman Maxine Waters in the Los Angeles District Attorney’s office. Meigs joined Creative Artists Agency (CAA) in 1996 as a mailroom clerk where she was promoted to motion picture talent agent. She was then hired as a talent agent at International Creative Management (ICM). Throughout her career, Meigs has worked with major talent in the music, television and film industries including Christina Applegate, Halle Berry, Ellen Burstyn, Beyoncé Knowles, and John Voight, Mark Salling, Cristina Saralegui, and the multi-talented power couple Mara Brock Akil and Salim Akil.

Meigs is a member of the State of California Bar Association, the Los Angeles County Bar Association, and Delta Sigma Theta Sorority Inc. In 2003, she served on the steering committee for the American Black Film Festival. In addition, Black Enterprise magazine recognized Meigs by including her in the 2003 “Hot List” and the 2004 “Brightest under 40” list. She also appeared in Honey magazine as one of the “25 Hottest Women in Entertainment.”

Andrea Nelson Meigs was interviewed by The HistoryMakers on November 18, 2013.

See how Andrea Meigs is related to other HistoryMakers
Donate Now
Click Here To Explore The Archive Today!