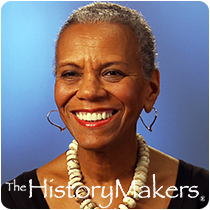 See how Andrea L. Taylor is related to other HistoryMakers
Donate Now

Corporate executive Andrea L. Taylor was born in Boston, Massachusetts in 1947, and grew up in Cambridge at a time when her parents, Della Taylor-Hardman and Francis C. Taylor, Sr., attended Boston University’s graduate school. Taylor’s family moved to Charleston, West Virginia in 1956, and she enrolled in the fifth grade at the former Mercer Elementary School. After graduating from Charleston High School in 1964, she moved to Boston, Massachusetts. She went on to receive her B.A. degree in journalism from Boston University in 1968, and later pursued post-graduate studies in international politics at New York University.

Taylor began her career as a journalist working as a reporter, producer and on-air host for The Boston Globe and WGBH-TV in Boston. In 1988, Taylor founded the Ford Foundation Media Fund, where, as executive director, she oversaw the global distribution of $50 million in grants. Taylor then served as president of the Washington, D.C.-based Benton Foundation from 2001 to 2003, before serving concurrently as vice president and director of the Center for Media and Community at the Education Development Center in Newton, Massachusetts. Taylor then founded and served as managing partner at Davis Creek Capital, a media technology firm. From 2005 to 2006, Taylor served as an adjunct professor of journalism at the Harvard Graduate School of Education. While there, she developed and taught a new course, “New Media, Power, and Global Diversity,” which focused on the role of public policy in the age of digital media. In July of 2006, Taylor was named director of U.S. Community Affairs at Microsoft Corporation. While there, she has managed Microsoft’s Unlimited Potential program, the Puget Sound community engagement, and the company’s employee United States community program.

From 1989 to 2012, Taylor served as an associate of the Council of Foundations, where she was also appointed as a member of the board of directors. She was appointed as a trustee of Boston University, the Lincoln Institute of Land Policy, Philanthropy Northwest and WNYC Public Radio. Taylor also served as a member of the board of directors for the Film Forum, Ms. Foundation for Women, and The Cleveland Foundation. In addition, Taylor served as a delegate to four global summits of the United Nations: Tunis, Africa in 2005; Geneva, Switzerland in 2003; Beijing, China in 1995; and Cairo, Egypt in 1994.

Taylor received the 2008 Distinguished Alumni Award from Boston University, and the 2013 Creative Spirit Award from the Black Alumni of Pratt Institute. She was also a finisher in the 2009 New York City Marathon.

Andrea L. Taylor was interviewed by The HistoryMakers on January 13, 2014.

See how Andrea L. Taylor is related to other HistoryMakers
Donate Now