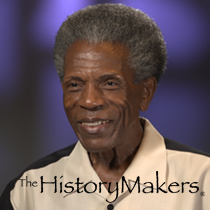 See how André De Shields is related to other HistoryMakers

Stage actor, director, and choreographer André De Shields was born on January 12, 1946 in Dundalk, Maryland to Mary Gunther and John De Shields. He was raised in Baltimore, Maryland as the ninth of eleven children. De Shields obtained his high school diploma at Baltimore City College in 1964, and earned his B.A. degree in English literature from the University of Wisconsin-Madison in 1970. In 1991, De Shields received his M.A. degree in African American studies from New York University’s Gallatin School of Individualized Study.

De Shields began his career in 1969 at Chicago’s Shubert Theatre in Tom O’Horgan’s production of Hair, The American Tribal-Love Rock Musical. In 1971, De Shields joined the Organic Theater Company and began performing in Wrap! in Chicago. In 1973, De Shields left the Organic Theater Company and became an associate choreographer for Bette Midler’s Clams on the Half Shell Revue the following year. In the late 1970s, De Shields began choreographing for Saturday Night Live and Sesame Street. He then went on to perform in many televised productions, including Ain’t Misbehavin’ (1982), Alice in Wonderland (1983), and Duke Ellington, The Music Lives On (1984). De Shields continued his work while holding professorships at New York University, Southern Methodist University, and the University of Michigan. In 2009, in honor of President Barack Obama’s election, Mr. De Shields created his solo performance, Frederick Douglass: Mine Eyes Have Seen the Glory.

De Shields received numerous awards, including three Chicago Joseph Jefferson Awards and nine AUDELCO Awards. In 1982, De Shields won an Emmy for Outstanding Individual Performance for the NBC TV Special based on Ain’t Misbehavin’. In 2004, he received honorary doctorate of fine arts degrees from the University of Wisconsin-Madison and from SUNY-Buffalo State. De Shields received a Village Voice OBIE Award for Sustained Excellence of Performance in 2007, and in 2009, he won the National Black Theatre Festival’s Living Legend Award. De Shields received a Distinguished Achievement Award from Fox Foundation Fellowship in 2012, a Making Waves Award from Florida Atlantic University in 2014, an Award for Excellence in The Arts from the theatre school at DePaul University in 2015, and a Pioneer of the Arts Award from Riant Theatre in 2016.

André De Shields was interviewed by The HistoryMakers on September 19, 2016.

See how André De Shields is related to other HistoryMakers