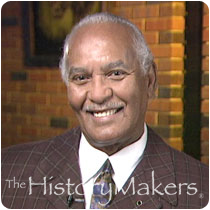 See how Anderson Jackson is related to other HistoryMakers

Businessman and community leader Anderson "Gene" Jackson has taken the family business, Jackson Mortuary, to new levels. Founded in 1926 by his grandfather, Jackson Mortuary was opened to serve Wichita's African American community and under Jackson's leadership, continues to do so today. Born on April 22, 1933, to Janett and Abner Jackson, Jr., Jackson's commitment to maintaining the family tradition has resulted in national recognition, growth, and commitment to service.

Jackson has spent the majority of his life in the family business. After returning from military service in 1955, he began work at Jackson Mortuary. In 1968, Jackson received his mortician's license from California Mortuary of Science. In 1982, after the death of his father, Abner Jackson, Jr., he became president of Jackson Mortuary and has grown the business significantly.

In addition to being a successful mortician, Jackson is extremely active in the Wichita community in both business and civic capacities. Jackson sits on the boards of many organizations committed to community economic development, including the Private Industry Council and the Kansas Department of Commerce. Additionally, Jackson was elected to the Kansas Gas and Electric Company's Board of Directors in March 1994 and he serves as president of the Wichita Chapter of the National Business League. He formerly served as president of the Kansas State Board of Mortuary Arts.

Jackson's business leadership and the commitment of the Jackson Mortuary to family service continues into a fifth generation. Jackson is married to Barbara Jackson and they are the parents of two daughters, Debra Dudley and Timna Jackson, and the grandparents of three.

Anderson Jackson passed away on September 9, 2012.

See how Anderson Jackson is related to other HistoryMakers
Click Here To Explore The Archive Today!