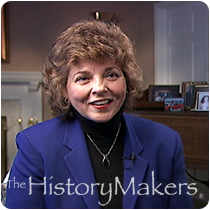 See how Amyre Ann Makupson is related to other HistoryMakers

Detroit television news anchor, Amyre Ann Porter Makupson was born on September 30, 1947 in River Rouge, Michigan to Dr. Rudolph Hannibal and Amyre Ann Porche Porter. She attended Visitation Catholic Elementary School in Detroit, Michigan and graduated from St. Mary’s Academy High School in Monroe, Michigan in 1965. She earned her B.A. degree in dramatics and speech from Fisk University in 1970 and her M.A. degree in speech arts/communications theory from American University in 1972.

Makupson held positions at WSM-TV in Nashville and WRC-TV in Washington, D.C. before returning to Detroit, Michigan in 1975 to work as director of public relations for Head Start, the Michigan Health Maintenance Organization. That same year, Makupson was hired by WGPR-TV, the nation’s first African American-owned television station, as a news anchor for “Big City News” and the Detroit focused talk show “Porterhouse.” In 1977, Makupson joined WKBD-TV as a news anchor and public affairs director. At WKBD-TV, she hosted “Morning Break,” the station’s daily talk show, and produced and anchored a five-minute newsbreak. In 1985, Makupson co-anchored WKBD’s “Ten O’clock News” and anchored “Eyewitness News at 11” on WKBD’s sister station, WWJ-TV.

Makupson has won six local Emmy awards including Best News Anchor, Best Interview/Discussion Program, and three for Best Commentary. In 1992 and 1995, Makupson won the Oakland County Bar Association Media Award for the show “Straight Talk” and named SCLC’s Media Person of the Year in 1995. She was also named the March of Dimes’ Humanitarian of the Year in 1996 and Makupson was inducted into the Silver Circle of the National Academy of Television Arts and Sciences in 2003. An author, Makupson published “So...What’s Next?” in 2004. Makupson serves on the boards of The Alzheimer’s Foundation, the Sickle Cell Association, the Skillman Foundation, Covenant House, the Providence Hospital Fund, and the March of Dimes. Makupson lives outside of Detroit, Michigan with her husband, Walter, with whom she has two children.

See how Amyre Ann Makupson is related to other HistoryMakers
Click Here To Explore The Archive Today!