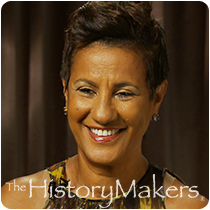 Fashion designer Amsale Aberra was born on March 1, 1954 in Addis Ababa, Ethiopia. Her father, Aberra Moltot, was an Ethiopian diplomat and government minister; her mother, Tsadale Assamnew, a homemaker. In 1973, Aberra moved to Poultney, Vermont to study commercial art at Green Mountain College. She then moved to Boston, Massachusetts, where she attended Boston State College (now known as the University of Massachusetts Boston) and received her B.A. degree in political science in 1981. She went on to earn her A.A. degree from the Fashion Institute of Technology in New York City in 1982.

Upon graduation, Aberra was hired as a design assistant for Harve Benard, Ltd. Then, in 1985, when she was unable to find an elegant and understated gown for her own wedding, she founded the bridal gown company Amsale Aberra, Inc. As her business grew, and Amsale gowns began to sell in boutiques and upscale department stores such as Saks Fifth Avenue and Neiman Marcus, she purchased two other wedding design lines, Christos and Kenneth Pool. In 1996, Aberra opened the Amsale flagship salon on New York’s Madison Avenue, and a year later, she launched the Amsale Evening Couture Collection. Aberra serves as co-founder, co-chief executive officer, and creative director of The Amsale Group, which includes the Amsale, Christos and Kenneth Pool labels.

Aberra’s wedding gowns have appeared in many films including Runaway Bride, Analyze This, American Wedding, 27 Dresses, When in Rome, and The Hangover, and on television shows such as Grey's Anatomy, The Oprah Winfrey Show, and The View. She has also dressed numerous celebrities, including Halle Berry, Julia Roberts, Selma Blair, Salma Hayek, Katherine Heigl, Kristen Bell, Katy Perry, Ariana Grande and Hilaria Thomas.

Aberra is a member of the Council of Fashion Designers of America (CFDA) and a trustee of the Fashion Institute of Technology. She has also served on the international advisory board of the Ethiopian Children's Fund, and was twice included on Ebony magazine's "Power 150" list of the 150 most influential African Americans.

Aberra and her husband, Neil Brown, live in Manhattan, New York City. They have one daughter, singer-songwriter Rachel Brown.

Amsale Aberra was interviewed by The HistoryMakers on June 17, 2014.