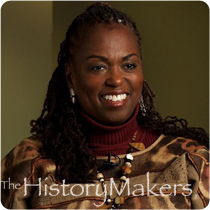 See how Amina J. Dickerson is related to other HistoryMakers
Donate Now

Art consultant Amina J. Dickerson was born Jill L. Dickerson on February 2, 1954 in Washington, D.C. to Ann Lee Stewart Dickerson and Julius James Dickerson. While in high school, Dickerson wrote a ritual play entitled, The Journey, which bore witness to cultural and personal transformation. Attending Emerson College in Boston, Massachusetts, in 1972, Dickerson produced her play "The Journey" and then took it on tour. Her theatrical activities brought her back to Washington where she was hired as an administrator by Arena Stage.

After completing the Harvard Program in arts administration in 1974, she joined the National Museum of African Art where she became director of education through 1982. There, she staged public programs including a tribute to Langston Hughes which featured musical group, Sweet Honey in the Rock, jazz and a script by Dr. Eleanor Traylor. Dickerson served as assistant director of Philadelphia’s Afro-American Historical and Cultural Museum in 1983. In 1984, she became the new president of Chicago’s venerable DuSable Museum of African American History and Culture. While serving at DuSable, Dickerson served as a consultant with the Schomburg Center for Black Research while earning her M.A. degree in arts administration from the American University in 1988. Joining the staff of the Chicago Historical Society in 1989, Dickerson brought in the “I Dream a World” exhibit and established the Sojourner Truth Mentoring Program for young women. In 1994, she became director of education and public programs for the museum. After a fellowship with Newberry Library and a stint as “distinguished visitor” at the John D. and Catherine T. MacArthur Foundation, Dickerson served as coordinator of the Arts in Education program of the Kraft Foods Company in 1997. There, she was promoted to director of corporate giving, and in 2003 she became senior director of Global Community Involvement. Now, on the other side of the philanthropy table, Dickerson funded valuable initiatives in health, hunger, education and the arts.

Retiring in 2009, Dickerson continues to serve the community through her activities on the boards of the Harris Center for Music and Dance at Millennium Park, co-chair of the Peer Network for International Giving of the Donor’s Forum and vice chair of the International Committee of the Council of Foundations. Dickerson was honored as Chicago Professional Grantor of the Year in 2002, Chicagoan of the Year in 2004 and she received the Legacy Award from the ETA Creative Arts Foundation and the Annual Sor Juana Award from the Mexican Fine Arts Center. The Jazz Institute honored her with the Tim Black Award for Community Service in 2006. Dickerson has presented on various arts and community issues and serves as a consultant to various arts, cultural and philanthropic organizations including the National Endowment for the Arts.

Dickerson lives in Chicago with her husband Julian Roberts.

Dickerson was interviewed by The HistoryMakers on December 17, 2009.

See how Amina J. Dickerson is related to other HistoryMakers
Donate Now
Click Here To Explore The Archive Today!