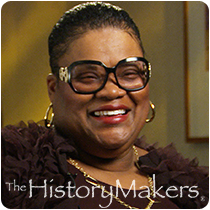 "It Must Be Borne In Mind That The Tragedy Of Life Doesn't Lie In Not Reaching Your Goal. The Tragedy Lies In Having No Goal To Reach."

Newspaper publisher, editor and journalist Amelia Ashley-Ward was born on September 17, 1957 in Magnolia, Mississippi to Amile Ashley and Louise James Ashley. While still a child, Ashley-Ward’s family moved to San Francisco, where she attended junior high and high school. Ashley-Ward went on to receive her B.A. degree in journalism and photojournalism in 1979 from San Jose State University.

Ashley-Ward has received many honors and awards while working at the Sun-Reporter Publishing Company. In 1980, she won the Photojournalism Award from the National Newspaper Publishers Association, and, in 1981, she received the Feature Writing Award from the same organization. The National Newspaper Publishers Association granted Ashley-Ward one more honor when, in 1998, she was elected Publisher of the Year. In 1997, she received the Woman of the Year award from the San Francisco Black Chamber of Commerce. In 2004, Ashley-Ward received the Alumnus of the Year award from San Jose State University, and was the commencement speaker for the university's Journalism department that same year. She was also honored in 2005, when she was selected as Woman of the Year by California State Senator Carole Migden. In 2008, Ashley-Ward was named one of the forty nine Most Influential People in San Francisco by 7x7 Magazine. She also served on the boards of the National Newspaper Publishers Association and the San Francisco branch of the National Association for the Advancement of Colored People.

Amelia Ashley-Ward was interviewed by The HistoryMakers on November 4, 2013.