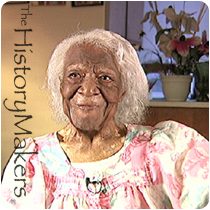 "All Right Now. and God Almighty."

Amazon Brooks was born in Arcola, Mississippi on November 26, 1897. Her maternal grandparents were slaves in Alabama, and her mother, Ella, was born in 1871, just a few years after the end of the Civil War. Her father, Thomas Duncan, hailed from Louisiana. She attended the Trail Lake School in Mt. Airy, and then later attended the Free School in Mound Bayou.

Brooks traveled north to Chicago in 1915 to help family members and to try to find greater opportunities for herself. The cost of her journey to the North was only $17.00. Once in Chicago, Brooks found work as a chambermaid at the Congress Hotel, and in 1933, during the World’s Fair, she began working in a laundry mat that provided linens and towels to hotels, and she would remain there for most of her working years. In 1938, Brooks joined the Antioch Missionary Baptist Church in Chicago.

Brooks’ most notable achievement, however, was that she voted in her first election in 1920, the year women were granted the right to vote, and she continued to do so in almost every election since then. Even more of a rarity, since the 1932 election when she voted for Franklin Delano Roosevelt, Brooks voted on a straight Democratic ticket.