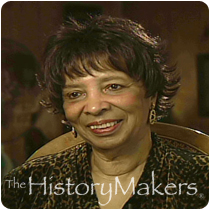 Rehabilitation counselor, educator, and first African American female to be appointed in 1974 to the rank of Lieutenant Commander in the United States Navy Reserve (USNR) without prior service, Alyce Earl Jenkins was born on September 22, 1935 in Birmingham, Alabama. The daughter of Margaret LaVern Wright Earl and Boysie Orr, Jenkins was raised by her mother and stepfather, Arthur Fred Earl. She attended Lincoln Elementary School and graduated from A.H. Parker High School in 1953. She majored in graphic arts at Alabama A&M College in Huntsville, Alabama where she graduated with a B.S. degree in mechanics arts in 1957. She earned a M.Ed. in rehabilitation counseling from Kent State University in 1968.

Published widely in professional journals, Jenkins’s writings, professional presentations, and federal funding awards focused on African Americans with disabilities, a group historically ignored by state and federal rehabilitation agencies. She is the producer/director of the video series, Living Your Dreams that highlights historical contributions of ordinary African Americans to the community. The video series includes Profiles of African Americans: Their Roles In Shaping Wright State University, A Predominantly White Institution and The Story of Neal Loving: Aviator, Experimental Airplane Builder and Double Amputee.

Jenkins’ professional service contributions include serving on the national planning committee for the Commission on Rehabilitation Counselor Education, an accrediting organization for undergraduate and graduate programs. Jenkins also served as a founding member for four years on the Ohio Counselor and Social Worker Licensure Board where she strongly advocated for practicing rehabilitation counselors.

Jenkins retired in 1993 as Wright State University’s Professor Emerita. Jenkins, who is included in the book, Black Americans in the United States Navy rose to the rank of full Commander before leaving the Navy in 1984.

Jenkins founded AEJ Associates, her own rehabilitation consulting firm in 1993. Returning to Wright State University, she served as interim director and associate director of the Wright State University Center for Teaching and Learning from 1996 to 1998. She was also associate assistant director of Wright State University’s African and African American Studies Program from 1999 to 2001 and coordinator of Youth Programs for the National Conference for Community and Justice from 2001 to 2003. Active in many organizations in her career, Jenkins is a member of the National Council on Rehabilitation Education, Dayton Dialog on Race Relations and the National Rehabilitation Professional Association. She was chosen as one of the Top Ten African American Women in Dayton in 2005 and in 2004, received the Keeping the Dream Alive Award from the Ohio Civil Rights Commission. In 2000, Jenkins was honored by the Ohio Senate with the Recognition of Outstanding Service Award, among other honors. A resident of Yellow Springs, Ohio, Jenkins is also a video oral historian and sits on the Yellow Springs Community Council.