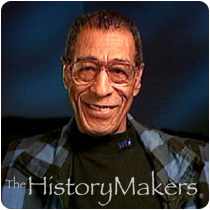 See how Alvin Spearman is related to other HistoryMakers
Donate Now

Al Spearman was born on August 26, 1926 in Chicago, Illinois. Spearman was a member of an amateur baseball team when some friends asked him to join Chicago's Negro League team, the Chicago American Giants. He was a pitcher for the American Giants from 1949-51 in addition to serving as an outfielder in a few games for the Kansas City Monarchs. After leaving the Negro Leagues, Spearman played baseball in Mexico, Canada, and Japan- where he was one of four Americans in the Pacific League. Spearman retired from baseball in 1959 to become a salesperson for the 7-Up Bottling Company. Spearman lived in Chicago. Spearman passed away on January 14, 2016.

See how Alvin Spearman is related to other HistoryMakers
Donate Now
Click Here To Explore The Archive Today!