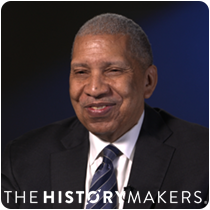 See how Alvin Marley is related to other HistoryMakers

Investment executive Alvin Marley was born on October 31, 1947 in Vicksburg, Mississippi. Marley served as president of the Alpha Phi Alpha Fraternity Beta Omicron Chapter in 1967 during his junior year at Tennessee State University in Nashville before graduating from Tennessee State University with his B.S. degree in mathematics in 1968. He served in the United States Air Force as a captain and mathematician from 1968 to 1971 before receiving his M.B.A. degree from Indiana University’s Kelley School of Business in 1973 in Bloomington, Indiana.

Marley began his career in finance at First National Bank of Chicago as an investment equity analyst before working as a portfolio manager and vice president from 1973 to 1989. He then joined Brinson Partners, which became part of Swiss Bank Corporation, as a partner and portfolio manager where he worked from 1989 to 1997. When Swiss Bank Corporation merged with the United Bank of Switzerland, Marley was named managing director and head of small cap equities investment at the newly formed UBS where he worked from 1997 to 2004. In 2005, Marley was named equity partner and senior portfolio manager for small capitalization equities at Lombardia Capital Partners, LLC. He was then promoted to serve as Lombardia Capital’s chief executive officer in 2013 and served in that capacity until 2017, when he stepped down as CEO. However, he retained his position as Lombardia’s senior portfolio manager for the small-cap core value and the small-cap value strategies.

An alumni supporter of his undergraduate alma mater, Marley established two scholarship programs in his name at Tennessee State University. He is also the recipient of numerous awards including the Wallace L. Jones Alumni Lifetime Achievement Award of the Consortium for Graduate Study in Management in 2013. In 2016, he also was selected as a Kelley School of Business Academy of Alumni Fellow.

A supporter of the Black Ensemble Theatre in Chicago, and a member of the Chicago’s NAACP Chapter and the Chicago Urban League, Alvin has mentored many over his forty year business career.

Marley has one adult daughter, Lisa, and three grandchildren.

Alvin Marley was interviewed by The HistoryMakers on February 20, 2018.

See how Alvin Marley is related to other HistoryMakers