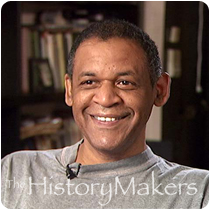 See how Alvin Bell is related to other HistoryMakers

Award-winning fashion designer Alvin Bernard Bell was born on December 27, 1958, in Philadelphia, Pennsylvania to Catherine and James Bell. Bell grew up in South Philadelphia, where he had a fondness for drawing and fashion, bought fashion magazines like Harper’s Bizarre and Vogue, and realized that he wanted to be a fashion designer at an early age. Bell won a Philadelphia citywide drawing contest at age eight and studied illustration at the Philadelphia Museum College of Art, where he was mentored by Margaret Caravera. Taking an advanced course at the Philadelphia Museum College of Art, Bell met future fashion phenom, Willi Smith who would become his closest friend. When Bell graduated from Edward Bok Vocational High School in 1964, Bell had a portfolio of ad illustrations, but had done no fashion work.

Before becoming a fashion designer, Bell worked as an illustrator and photojournalist. In 1964, Bell was referred by a bridal shop to Alfred Angelo Bridal, where he was hired as an illustrator. As a photojournalist, he went to fashion shows and took photos of the designs and made his own sketches; he sold these sketches of designs to other fashion designers. Bell created suits for the P.S.I. fashion label and later went on to work for Roy Halston and Anne Klein. After twenty years of experience, Bell began publishing his own fashion industry trade newsletter called Designer Report.

See how Alvin Bell is related to other HistoryMakers
Click Here To Explore The Archive Today!