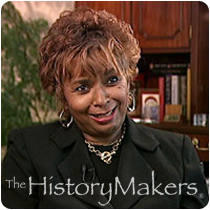 Widow of the late Secretary of Commerce Ron Brown, Alma Arrington Brown was born in Brooklyn, New York, on February 14, 1940. After high school, she attended Fisk University in Nashville, Tennessee, where she received her B.A., and then later attended Manhattanville College in Purchase, New York, where she earned her master's degree.

Brown and her husband Ron were married after he completed his Army basic training in 1962. In 1963 he was called up to active duty, sent first to Germany and later to South Korea. After he completed his service in 1967, the Browns returned to New York, and in 1973 relocated to Washington, D.C., where Ron headed the offices of the National Urban League. In 1975, Alma began working for the National Black Child Development Institute as a program specialist, and from there she became the program director of the National Council of Negro Women. Brown moved into the public sector in 1984, serving as executive assistant to the acting director of the Office of International Business in Washington, D.C., a post she later assumed.

Brown became involved in broadcasting in 1989 when she took over as director of public affairs and public relations for WKYS-FM. She remained there for six years before joining Chevy Chase Bank as a vice president. Later, when Chevy Chase Bank and Black Entertainment Television joined to form BET Financial Services, she became vice chairperson of the venture. After the bank severed the relationship in 1999, Brown stayed on with Chevy Chase, where she presently serves as senior vice president.

With the death of her husband in a plane crash in 1996, Brown remained strong, and together with her children established the Ronald H. Brown Foundation, which established a policy center for domestic and international commercial growth, as well as the Ron Brown Scholars Program. She was also named to serve as an honorary co-chairperson of President Bill Clinton's reelection campaign in 1996. She remains active with the National Urban League, the United Negro College Fund and the Girl Scouts of America. The Ford Foundation, the National Council of Negro Women and the National Association of Broadcasters have all honored her for her work. Brown has also been active in keeping the memory of her husband alive, participating in the christening of the U.S.S. Research Vessel Ron Brown and presenting awards in his honor.

Brown has two children, Tracy and Michael, and two grandchildren. She lives in Maryland.