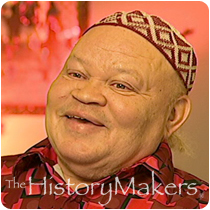 See how Allen Stringfellow is related to other HistoryMakers

Allen Stringfellow was born on July 9, 1923. He was raised by his deeply religious great-grandmother, who would take Allen to open-air baptisms performed by their church in Champaign, Illinois. Although he did not live with his parents, who resided in Chicago, Stringfellow would often visit his mother and father, a jazz musician and nightclub manager.

Allen showed promise in his artistic abilities at a very young age. He enrolled in art classes at the University of Illinois in Champaign, and finished his training at the Art Institute in Milwaukee, Wisconsin. After graduating, Stringfellow moved to Chicago where he taught print techniques at the South Side Community Arts Center as part of the National Youth Administration program. Later, as general manager of Armand Lee's well-known framing company, he worked with the most prestigious designers in the country. His influence in the art community steadily increased and, by 1960, Stringfellow owned an original art gallery in Chicago's Old Town community.

As with many artists, Stringfellow examines themes which have been important in shaping his life. His artwork often includes religious and jazz imagery. Many of his most famous pieces are inspired by baptismal scenes from his youth, including "Red Umbrella Down by the Riverside" and "Going to Lay Down My Sword and Shield." Although he has explored many artistic traditions, Stringfellow is currently working with collage and watercolor, examining the depth and movement that can be achieved through these mediums. Inspired by the late William S. Carter, Stringfellow refers to him as his best friend and motivator.

Stringfellow has been the recipient of numerous awards. His signature works include "Ladies Day", "The Gallery" and "All That Jazz". His works have been shown in many galleries, including the Art Institute of Chicago, Chicago Historical Society and DuSable Museum of African American History.

See how Allen Stringfellow is related to other HistoryMakers
Click Here To Explore The Archive Today! 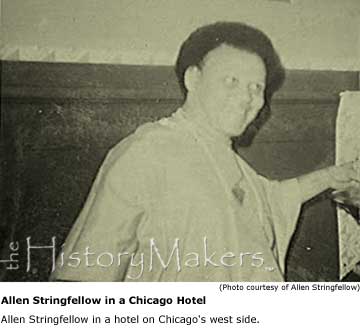 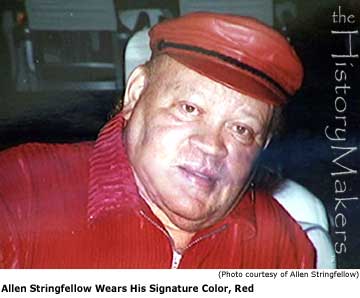