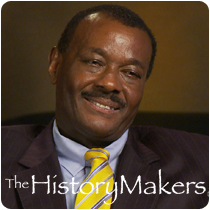 See how Allen Sessoms is related to other HistoryMakers
Donate Now

In 1973, Sessoms was hired to work as a scientific associate at the European Organization of Nuclear Research (CERN), where he researched quarks and similar particles. While at CERN, Sessoms became an assistant professor of physics at Harvard University. Sessoms moved to the U.S. State Department in 1980 as a senior technical advisor for the Bureau of Oceans and International Environmental and Scientific Affairs. From 1982 to 1987, Sessoms served as Director of the Office of Nuclear Technology and Safeguards in the same Bureau before becoming a Counselor for Scientific and Technological Affairs at the United States Embassy in Paris, France. Sessoms then traveled to Mexico, where he was a Minister-Counsel for Political Affairs at the United States Embassy before serving as its Deputy Chief of Mission, then the largest United States diplomatic mission in the world. In 1993, Sessoms left the United States State Department and began working as executive vice president at the University of Massachusetts system and also became its vice president for academic affairs. Following his time in Massachusetts, Sessoms was named president of Queens College, part of The City University of New York. Sessoms then spent time at Harvard University, first as a visiting scholar and then as a fellow of the Belfer Center for Science and International Affairs and as a lecturer in public policy. From 2003 to 2008, Sessoms served as the ninth president of Delaware State University prior to his appointment as president of the University of the District of Columbia. He is also a consultant to the U.S. intelligence community.

Sessoms has received a Ford Foundation Travel and Study Grant and an Alfred P. Sloan Foundation Fellowship. He has been bestowed two honorary doctorates from Union College and Soka University in Japan. Sessoms also received the Medal of Highest Honor from Soka University and the Seikyo Culture Award in Japan. In 1999, the Yale University Graduate School Association awarded him the Wilbur Lucius Cross Medal and he was named the Officier dans l’Ordre des Palmes Académiques (“Officer of the Order of Academic Palms) in France.

See how Allen Sessoms is related to other HistoryMakers
Donate Now
Click Here To Explore The Archive Today!