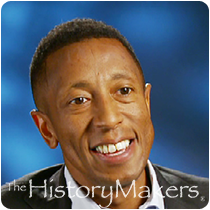 See how Allan Golston is related to other HistoryMakers
Donate Now

Foundation executive Allan C. Golston was born in Denver, Colorado in 1967. His father was a mailman; his mother a nurse. Golston’s motivation early in life stemmed from his parents’ work ethic. Golston received his B.S. degree in accounting from the University of Colorado, and later his M.B.A. degree from Seattle University.

Upon graduation from the University of Colorado in 1989, Golston joined KPMG Peat Marwick as a senior auditor. In 1991, he moved to MIS, Inc., as director of business analysis and product development. Golston also taught as an adjunct professor at the Community College of Denver, and, in 1993, returned to his alma mater, joining the University of Colorado Hospital as its director of finance and controller. After four years at the University's hospital, Golston moved to Seattle, Washington, where he became director of finance for Swedish Health Services, the largest health provider in the Pacific Northwest.

In 2000, Golston was approached by the Bill & Melinda Gates Foundation and joined the organization as its chief financial and administrative officer. He went on to serve as a member of the senior executive team for foundation strategy; and, for nine months in 2006, served as the interim executive director of the foundation’s Global Health division. In October of 2006, Golston was named president of the United States Program for the Bill & Melinda Gates Foundation.

Golston has sat on a number of boards, including Stryker Corporation, the University of Washington Medicine, Seattle University, Charter School Growth Fund, MOM Brands, Global Alliance for Vaccines and Immunization (GAVI), New Futures, the Artist Trust, Make-A-Wish Foundation of Alaska and Washington, Philanthropy Northwest, and the Public Library of Science. He has served as a resource council member for both the Rainier Scholars program and the Robert Woods Johnson Commission to Build a Healthier America, on the advisory committee for the Northwest African American Museum in Seattle, and on the Resource Council for the Smithsonian National Museum of African American History and Culture in Washington, D.C. In addition, Golston was a member of the 2011 class of Henry Crown Fellows at the Aspen Institute and was named to Puget Sound Business Journal’s 40 Under 40 in 2003.

Allan Golston was interviewed by The HistoryMakers on October 3, 2014.

See how Allan Golston is related to other HistoryMakers
Donate Now