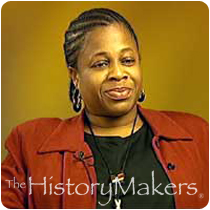 See how Alisa Starks is related to other HistoryMakers
Donate Now

Starks graduated from Aquinas Dominican High School in 1978, enrolling at Northwestern University. She received her B.S. in journalism in 1982 and her M.S. in 1983 from Northwestern University's Medill School of Journalism. From 1984 to 1989, Starks worked in advertising for Burrell Communications Group in Chicago. She and her husband, Donzell, lived in Los Angeles for two years before returning to Chicago. Starks returned to Burrell, where she became a vice president.

Deciding to take the entrepreneurial plunge, the Starkses began to explore partnerships to build new theater complexes in minority neighborhoods-areas that major movie chains had been historically neglected. In 1997, they beat out Magic Johnson to win financial support from the city of Chicago to build three multiplexes on Chicago's South and West sides. The new theaters were hailed for their aesthetic beauty and their ability to bring jobs to otherwise neglected and rundown areas. By 1999, the Starkses expanded their theater empire, building a new cinema in Charlotte, North Carolina, and setting their sights on other inner-city neighborhoods around the country. The same year, their company partnered to create the Meridian Entertainment Group, which began by opening a chain of Meridian Theaters and by acquiring eight existing Chicago movie theaters. In just two years, the Starkses had gone from just three multiplexes to controlling 20 percent of Chicago's movie screens. A downturn in the market and other problems forced the Starks to cut back to their original investments, which they operate today. They see their movie theaters as community centers.

Alisa Starks has been an active leader in several community and civic organizations. She has served on the boards of the Muntu Dance Theatre, the Metropolitan Pier of Exposition Authority, the Ancona School and the Chicago International Film Festival. Starks and her high school sweetheart, Donzell, married in 1988. They have one child, Ahmad, and live on Chicago's South Side.

Alisa Starks was interviewed by The HistoryMakers on August 27, 2003.

See how Alisa Starks is related to other HistoryMakers
Donate Now
Click Here To Explore The Archive Today!