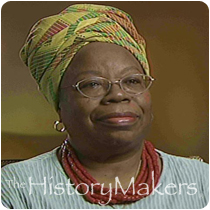 See how Alice Windom is related to other HistoryMakers
Donate Now

Social worker Alice Mary Windom was born on March 30, 1936, in St. Louis, Missouri to Frances Louise Jones Windom and Dr. John Henry Windom. Windom is from a family of educators. Her grandfather, Christopher Columbus Jones, was Southern Illinois University’s first African American student. Windom’s parents met at the University of Illinois and raised their daughter on African American college campuses at Albany State College and Prairie View A&M University. She attended Prairie View Training School in Texas and Cote Brilliante Elementary School in St. Louis. Windom graduated from Sumner High School in 1953. Offered half tuition at Central State University (CSU) in Wilberforce, Ohio, Windom was exposed to African American historian and school president Dr. Charles Wesley and lectures by Thurgood Marshall, J.A. Rogers and others. She started and organized a successful sit-in of Xenia, Ohio’s Geyer’s Restaurant in 1957. Graduating that year with her B.S. degree in social work, Windom went on to earn her M.S.W. degree from the University of Chicago in 1959.

From June 1958 to August of 1962, Windom worked as a social worker and as a child welfare worker for the State of Illinois Department of Mental Health Division of Family and Children’s Services. From 1962 to 1964, Windom made a decision to live and work in Ghana, West Africa. Working as a secondary school teacher and secretary to the Ethiopian Ambassador, Windom was a part of an historic group of diverse African American expatriates in Ghana which included John Henrik Clarke, Maya Angelou, Curtis “Kojo” Morrow and the elder W.E.B. DuBois. In 1964, Windom helped plan the itinerary for Malcolm X’s trip to Ghana and served as administrative assistant for the United Nations Economic Commission for Africa from 1964 to 1968, organizing international conferences in seven countries. From 1969 to 1972, Windom was a social welfare organizer for the Department of Social Welfare in Lusaka, Zambia. In the United States, she served as director of social services for the St. Louis Medium Security Institution from 1973 to 1974. In 1977, Windom sued the City of St. Louis for racial and sexual discrimination and the denial of free speech.

Known for her many well-documented excursions to the African world, Windom served as coordinator for the James T. Bush Center at the University of Missouri-St. Louis; initiating research and workshops in employment, education, housing, and law. A sought after lecturer, Windom is a member of a number of organizations including the Association for the Study of Classical African Civilization and the African Heritage Studies Association.

Alice Mary Windom was interviewed by The HistoryMakers on December 19, 2006.

See how Alice Windom is related to other HistoryMakers
Donate Now
Click Here To Explore The Archive Today!