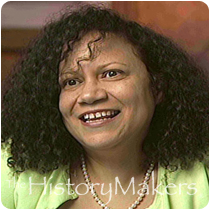 See how Alice Randall is related to other HistoryMakers
Donate Now

Writer Alice Randall was born to Mari-Alice and George Randall on May 4, 1959 in Detroit, Michigan. She spent her early years in Detroit where she attended St. Phillips Lutheran School and Greenfield Peace Lutheran School. Moving with her mother to Washington, D.C., she was enrolled at Amidon Elementary School and graduated from Georgetown Day School. Briefly traveling to Great Britain to enroll in the Institute of Archaeology at the University of London, she returned to enter Harvard University in the fall of 1977.

At Harvard, she was influenced by Hubert Matos, Harry Levin and Nathan Irving Huggins and was a member of the International Relations Council. Randall earned honors and her B.A. degree in English and American literature in 1981. In the early 1980s, Randall worked as a journalist and as a writer for Wolftrap Performing Arts Center in Washington, D.C. Cultivating a taste for country music in 1981, Randall decided to move to Nashville in 1983 to become a country music song-writer. Having her first country hits in 1983 and 1984, Randall wrote "Girls Ride Horses Too" in 1987 and garnered a number one hit with "XXX's and OOO's: An American Girl" recorded by Trisha Yearwood in 1993. Writing over 200 country songs with thirty recorded, Randall is the first African American woman to have a number one country hit.

As a screenwriter, Randall wrote a television movie for CBS based on her song XXX's and OOO's: An American Girl in 1994, and contributed to screenplay adaptations of “Their Eyes Were Watching God,” “Brer Rabbit” and “Parting the Waters.” In the 1990s, she and fellow songwriter, J. C. Crowley, created a film and television development company called Black and White Pictures. Randall and friend, Mimi Oka, now operate a film and television development company in Nashville called “She Writes Movies, Inc.” She is also a member of the Harvard-Radcliffe Club of Middle Tennessee. Randall has recently published the book “Rebel Yell” in September, 2009. Randall is married to attorney, David Steele Ewing and has a daughter, Caroline Randall Williams.

Alice Randall was interviewed by The HistoryMakers on March 17, 2007.

See how Alice Randall is related to other HistoryMakers
Donate Now
Click Here To Explore The Archive Today!