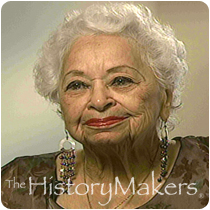 See how Alice Key is related to other HistoryMakers

Community activist, dancer, and newspaper columnist Alice Marie Key was born on March 18, 1911, in Henderson, Kentucky to Louise and Malcolm Key. As a young child, she moved to Riverside, California with her family. She finished high school in Riverside and then went to the University of California, Los Angeles to pursue a degree in journalism. Her mother managed a coffee shop near the famous Club Alabama in central Los Angeles, California. Key met a girl there who worked at the Cotton Club in Culver City, California, who eventually persuaded her to dance at the club, too. She left school and danced for the next five years.

Key’s career as a dancer took her to New York where she worked at the Ubangi Club, and later, she spent six months in Europe touring with the Cotton Club Show. In 1943, Key ended her dancing career and started working as a writer for an African American newspaper, the "Los Angeles Tribune." In 1954, she moved to Las Vegas to take a job working for the "Las Vegas Voice." Not long after her arrival, Key and Bob Bailey started the first all-African American television talk show in Las Vegas, "Talk of the Town," which she co-hosted for several months. In the 1960s, Key became the public relations manager for the Nevada Committee for the Rights of Women, which promoted education about birth control and fought for reforms to the abortion laws in Nevada. After that position, she worked for the Economic Opportunity Board until 1971. In 1983, Governor Richard Bryan named Key as the Deputy Commissioner of Labor, a position she held for ten years. She became involved in political campaigns, the National Association for the Advancement of Colored People, and founded the Barbara Jordan Democratic Women’s Club. When she retired from public service, Key worked to preserve the history of African Americans in Las Vegas through the Moulin Rouge Preservation Association and the Black History Society, Inc. On July 20, 2005, Key was inducted into KLAS, Channel 8’s Wall of Fame.

Key resided until her death on September 29, 2010, in Las Vegas, Nevada. Her dedication to equality and commitment to her community helped to lower barriers faced by women and African Americans in Nevada. She had one daughter, Alice McAbee, two grandsons, and several great-grandchildren.

Alice Marie Key was interviewed by The HistoryMakers on October 31, 2007.

See how Alice Key is related to other HistoryMakers
Click Here To Explore The Archive Today!