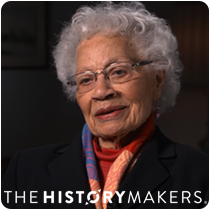 Favorite Color:
Blue
Favorite Food:
Ice Cream
Favorite Time of Year:
Spring
Favorite Vacation Spot:
Black Lake, Rochester, New York
Favorite Quote:
Don’t Ask Anyone To Do Anything That You Would Not Do Yourself

Favorite Color:
Blue
Favorite Food:
Ice Cream
Favorite Time of Year:
Spring
Favorite Vacation Spot:
Black Lake, Rochester, New York
Favorite Quote:
Don’t Ask Anyone To Do Anything That You Would Not Do Yourself

See how Alice H. Young is related to other HistoryMakers

Education administrator Alice H. Young was born on September 29, 1923 in Wise, Warrenton County, North Carolina to John and Lucy (neé Allen) Holloway. She graduated valedictorian with honors and received her B.S. degree in childhood development and nutrition from Bennett College, in Greenville, North Carolina. She completed her graduate studies, and obtained her M.S. degree in education supervision and administration in 1952, and later her Ph.D degree in education supervision and administration in 1969 both from the University of Rochester, in Rochester, New York.

Young was named a trustee in 1961, and helped to establish Monroe Community College, in Rochester. She was also selected by the Rochester School District superintendent to serve as the director for Title One, the program created by the U.S. Department of Education to distribute funding to schools and school districts with a high percentage of students from low-income families. She crafted various proposals and supervised the programs for the integration of Rochester public schools in 1965. Young returned to the Rochester City School District as principal of School #5 on Plymouth Avenue (1969-1971). In 1971, Young was then promoted to the position of Administrative Director of Elementary Schools, City of Rochester School District and elected board chair of Monroe Community College in 1978. Named for Young, in dedication to her support for the institution, The Alice H. Young Teaching Internship for Ethnic Minority Graduate students at Monroe Community College (MCC) was inaugurated in 1987. The Alice Holloway Young Society for Charitable Giving of the MCC Foundation was also established to honor Dr. Young as a twentieth-century American pioneer in education.

Young has been the recipient of numerous honors and awards including: Urban League of Rochester's Distinguished Community Service Award, Award for Humanitarian and Distinguished Achievement in Community Service, Civic Award from the Rochester Area Chamber of Commerce for Meritorious Contributions in the Field of Education, University of Rochester Distinguished Alumna Award and Anne M. Bushnell Memorial Award for Special Achievement, the highest honor conferred by the State University of New York Association of the Boards of Trustees of Community Colleges.

Alice H. Young was interviewed by The HistoryMakers on April 20, 2017.

See how Alice H. Young is related to other HistoryMakers