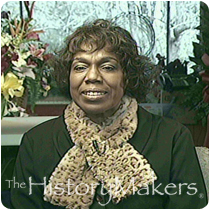 Favorite Color:
Orange
Favorite Food:
Shrimp
Favorite Vacation Spot:
Africa
Favorite Quote:
Do Unto Others As You Would Have Them Do Unto You.

Favorite Color:
Orange
Favorite Food:
Shrimp
Favorite Vacation Spot:
Africa
Favorite Quote:
Do Unto Others As You Would Have Them Do Unto You.

See how Alice Bussey is related to other HistoryMakers
Donate Now

A lifelong member of Poplar Springs Baptist Church, Bussey’s ancestors were among the founders of the church more than 135 years ago.

After completing undergraduate and graduate school in California and working concurrently for the United States Department of Labor, Bussey returned to Georgia to serve as the first Labor Department federal representative of the state. In that capacity, she managed millions of dollars, conducted investigations and developed programs for the elderly, welfare clients, and high school dropouts. Bussey was also the Federal Women's Program manager for the eight state, Southeastern Region. In 1985, Bussey became the first woman elected as president of the Atlanta Business League.

After her marriage to florist James Bussey, she began her career in the floral industry. Soon, she became the first African American FTD florist in Atlanta. Having helped create over twenty new businesses, Bussey is internationally known in the industry for training small business owners. Over a thirty-year period, Bussey’s florist has grown from a local retail operation to one that does business internationally. The Busseys have traveled extensively, developing business markets throughout the USA, Europe, and Africa. They were members of former Atlanta mayor Andrew Young’s historic trade mission to Jamaica, Trinadad and Tabago, and Barbados.

Bussey serves on the board of The International Florists Association (IFA), Georgia Council of Visitors, Atlanta Private Industry Council, and many others. She and her husband are the parents of three adult children and one grandchild. They reside in Decatur, Georgia.

See how Alice Bussey is related to other HistoryMakers
Donate Now
Click Here To Explore The Archive Today!