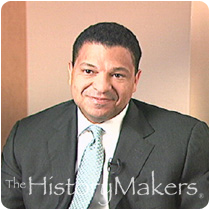 See how Alfred Liggins, III is related to other HistoryMakers
Donate Now

Alfred Charles Liggins III was born on January 30, 1965, in Omaha, Nebraska. Liggins spent his early childhood in Omaha and at the age of seven moved to Washington, D.C. when his mother, radio mogul Cathy Hughes, took a job at Howard University. When he was sixteen, Liggins’s mother and stepfather purchased AM radio station WOL. At first Liggins hosted a teen talk show on WOL, though he was more interested in the record industry than the radio business. In 1983, Liggins earned his high school diploma from Wilson High School in Washington.

After graduation, Liggins drove cross-country to California where he began working in direct mail advertising before landing a job in the record industry. From 1983 until 1984, Liggins worked in sales and management for Light Records and as a production coordinator for singer Patrick Anderson. After a job with Motown Records fell through, Liggins decided to move back to Washington, D.C. in 1985 to help his mother, who was by then divorced and running the fledging radio station alone. Liggins attended night school at the University of the District of Columbia, and worked at the radio station during the day. From 1986 until 1994, Liggins worked in the sales department at WOL, quickly climbing from representative to sales manager, helping the station rise in ratings and into the black. At Liggins's urging the family business began to grow with the purchase of FM stations in Washington, D.C., and Baltimore, Maryland, thus the beginning of the Radio One empire.

In 1994, Liggins took over the day-to-day operations of the family business, becoming the president and chief executive officer of Radio One, with his mother retaining ownership. In 1995, Liggins earned his MBA degree from the Wharton School of Business, University of Pennsylvania. In 1999, under Liggins's leadership, Radio One went public and made history as the first female African American owned company on the stock exchange. In 2000, Radio One purchased twenty-one radio stations from Clear Channel, more than doubling the company’s revenue. Radio One eventually became the nation’s largest radio company, targeting African American and urban listeners with fifty-one stations in more than twenty cities.

In 2004, Liggins expanded Radio One’s media sphere when he launched TV One, a cable network for African American adults. Liggins has been the recipient of numerous awards including Ernst and Young’s Entrepreneur of the Year.

See how Alfred Liggins, III is related to other HistoryMakers
Donate Now
Click Here To Explore The Archive Today!