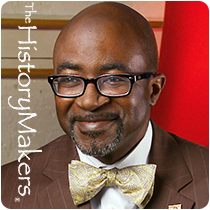 "The road to Heaven is paved through Hell."

Journalist and commentator Alfred Adam Edmond Jr. was born on March 8, 1960 in Long Branch, New Jersey to Alfred and Virginia Edmond. He graduated from Rutgers University in 1983 with a B.A. degree in studio art and a minor in economics. Having served as editor of a campus newspaper, Edmond worked during the next three years at black-owned newspapers in New York – first, in 1983, as managing editor of Big Red News, in Brooklyn, and then as associate editor at the New York Daily Challenge, in 1985. In 1986, he moved to magazines as senior editor at Modern Black Men (MBM) . A year later, he joined publisher Earl Graves at Black Enterprise magazine.

Edmond, an associate editor, obtained an exclusive interview with financier Reginald F. Lewis, who was about to execute his company’s $985 million acquisition of Beatrice International Food Company. Edmond was then sought as a quotable expert on financial matters outside of his own publication. By 1995, Edmond rose to the post of executive editor at Black Enterprise. Beginning in 1997, Edmond gave much of his attention to Black Enterprise.com, the magazine’s Web site, working to expand the publication’s digital reach.

Appointed editor-in-chief at Black Enterprise in 2000, he led the magazine’s Black Wealth Initiative, an effort to focus African Americans on the task of wealth building. In 2006, Edmond launched his “Off My Chest” blog column, taking on any subject that caught his attention, from culture to politics to personal finance. He continued his great interest in Black Enterprise.com becoming its editor-in-chief in 2008 and assuming the role of multimedia editor-at-large in 2010. He has also expanded his work as a motivational speaker, and in 2012 entered into a deal with Windsor Neckwear to launch a line of bow ties.

Edmond was interviewed by TheHistoryMakers on July 14, 2013.