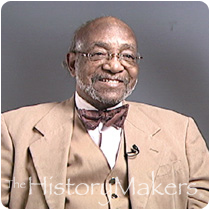 See how Alfred Cain is related to other HistoryMakers

Musical director and writer Alfred Earl Cain was born October 5, 1921, in Warrior, Alabama. Cain's mother was the former Helen Hazel Moore and his father, Louis Cain, was a graduate of Tuskegee Institute. Cain attended Trinity School in Alabama and Nathan Hale Junior High School in Brooklyn, New York; he graduated from Alexander Hamilton High School in 1939, where he was a member of the school chorus, the Frederick Douglass Society, and wrote for the Hamiltonian. Drafted in 1943, Cain was stationed at Wright Field in Dayton, Ohio. Cain earned a B.A. degree in 1949, and an M.A. degree from Columbia University in public law and government in 1951; while at Columbia, he became president of the local chapter of the NAACP and formed an NAACP chorus, which featured Doug Pugh, Deke Johnson, and future opera great, Leontyne Price. Cain served as a social investigator for the New York City Department of Welfare from 1951 to 1959, when he decided to serve as his church’s full time musical director.

Cain worked as the musical director for Vinette Carroll’s production of Dark of the Moon in 1950, and recorded with Fred Norman’s The Normanaires Quartet in 1953, featuring Brock Peters and Theresa Merritt. Cain was also musical director for Trumpets of God and James Baldwin’s Amen Corner in 1960. Some of the talent that Cain worked with included: Cicely Tyson, Roscoe Lee Brown, Clarence Williams III, James Earl Jones, Frank Silvera, Juanita Hall, and Isabel Sanford. A talented writer, Cain worked for Educational Heritage of Yonkers as editor of The Negro Heritage Reader for Young People and The Winding Road to Freedom: A Documentary History of Negro Experiences in America, both published in 1965. Cain also served as an editor of the syndicated insert Tuesday Magazine in the 1970s and as a staff writer at Prentice-Hall Publishers.

After moving to Chicago in 1981, Cain served as communications director and speechwriter for former Illinois Attorney General Roland Burris. He was an active member of Ingleside-Whitfield United Methodist Church where he served as a columnist for the United Methodist Northern Illinois Conference Reporter.

See how Alfred Cain is related to other HistoryMakers
Click Here To Explore The Archive Today!