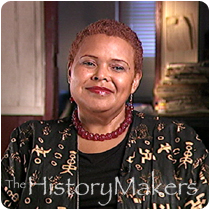 See how Alexis Scott is related to other HistoryMakers

Journalist and publisher Marian Alexis Scott was born and raised in Atlanta, Georgia; her grandfather was W.A. Scott II, the founder of the Atlanta Daily World, which was the nation’s first black-owned daily newspaper. After graduating from Booker T. Washington High School, Scott attended Barnard College in New York City and Spelman College in Atlanta; she later attended the Columbia University School of Journalism as a summer participant in the 1974 Michelle Clark Fellowship Program. Scott also graduated from the Regional Leadership Institute in 1992, and Leadership Atlanta in 1991.

After a twenty-two year career with the Atlanta Journal-Constitution and Cox Enterprises, Inc, where she worked her way up from reporter to vice president of community affairs at the and then director of diversity at Cox, Scott became involved in the inner workings of the Atlanta Daily World. Scott's duties included acting as publisher and featured commentator on The Georgia Gang, a week-in-review program on politics, which was broadcasted on FOX 5 in Atlanta. Scott was also active in nonprofit organizations such as St. Jude’s Recovery Center; Kenny Leon’s True Colors theater company; and serving as a board member of Atlanta History Center; the High Museum of Art; the Atlanta Convention and Visitors Bureau; and Central Atlanta Progress.

In 2003, Scott was appointed by Mayor Shirley Franklin to the board of the Atlanta Workforce Development Agency. Scott has received many awards and honors, including the 2004 Imperial Court Daughters of Isis Hall of Fame Award; the 2004 TD Jake’s Megafest Phenomenal Woman Award; an honorary doctor of humane letters from Argosy University in Atlanta in 2003; and a 2001 Citizen of the Year Award from Southwest Hospital and Medical Center. Scott also served as the president of the Atlanta Press Club.

See how Alexis Scott is related to other HistoryMakers
Click Here To Explore The Archive Today!