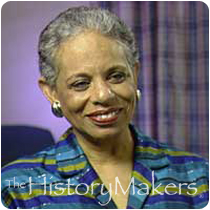 See how Alexine Jackson is related to other HistoryMakers

Alexine Clement Jackson is active in volunteerism and community service for the African American community. Jackson was born in Sumter, South Carolina, on June 10, 1936. Jackson's mother, Josephine Clement, was active in North Carolina politics and business and volunteered her time to a number of civic organizations. Her father, William A. Clement, was an insurance executive who devoted great amounts of time to civic and fraternal organizations. Jackson earned her B.A. from Spelman College in Atlanta and an M.A. in speech pathology and audiology from the University of Iowa.

Jackson has devoted her life to civic organizations. She is the former national president of the Young Women's Christian Association (YWCA), and in that capacity she traveled to the Middle East as part of a fact-finding mission in 1996. Jackson led the American delegation to the 1999 World YWCA Council in Cairo and was a delegate in the 1995 Council in South Korea. Prior to that, she had been chosen as a development education consultant by the YWCA to explore issues relating to women in poverty, and traveled to the Philippines, Mexico and Kenya, as well as participating in the International Learning Center in Hawaii. The Taiwanese Minister of Foreign Affairs invited Jackson, along with six other leaders of women's organizations, to visit the country in 1985 and speak to different groups.

After a fifteen-year battle with breast cancer, Jackson served on the board of the Cancer Research Foundation of America and was the chairperson of the Intercultural Cancer Council, where she focused her energies on minority cancer education and prevention. In 2009, Jackson became the chair of the board of directors for Susan G. Komen for the Cure. With more than twenty-five years of work in civic organizations, Jackson has garnered numerous awards for her work. She has been awarded the 2001 Community Service Award by the Black Women's Agenda, the Woman of Courage and Distinction Award by the National Association of Colored Women's Clubs, and was named Washingtonian of the Year by Washingtonian magazine. Her husband, Aaron, is the chief of the Division of Urology at Howard University Hospital.

See how Alexine Jackson is related to other HistoryMakers
Click Here To Explore The Archive Today!