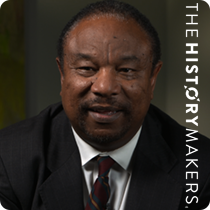 See how Alex Parrish is related to other HistoryMakers

Lawyer Alex Parrish was born on October 5, 1955 in Memphis, Tennessee. He received his B.A. degree from Howard University in Washington, D.C. in 1977, and his J.D. degree from Harvard Law School in Cambridge, Massachusetts in 1980.

Parrish worked as a law clerk for Judge Damon J. Keith of the U.S. Court of Appeals for the Sixth Circuit and served from 1980 to 1981, and then was admitted to the District of Columbia Bar on May 7, 1981. He then served for four years in the U.S. Department of the Army, as assistant to the general counsel at the Pentagon, from 1981 to 1985. Parrish was then admitted to the State Bar of Michigan on November 22, 1985, and joined the Detroit law firm of Honigman, Miller, Schwartz and Cohn L.L.P. in 1985, and was named partner in the firm in 1989. In 2004, Parrish, was credited for developing one of the largest law practices focused on minority and women owned businesses. Parrish also served on the faculty at the Michigan Institute for Continuing Legal Education from 1990 to 2015.

Parrish was named in DBusiness magazine among the “Top Lawyers” for 2010 and 2011, and was selected by The Michigan Chronicle as “Detroit’s Mergers and Acquistions Lawyer of the Year for 2011.” In 2014, Parrish was honored as one of Michigan Chronicle’s “Power 50.” Parrish has also been recognized by Michigan Super Lawyers and Crain’s Detroit Business as one of Michigan’s Outstanding Young Business Leaders.

Parrish and his wife Pamela, have one son.

Alex Parrish was interviewed by The HistoryMakers on October 19, 2017.

See how Alex Parrish is related to other HistoryMakers