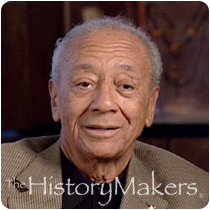 See how Albert W. Johnson is related to other HistoryMakers

Entrepreneur and philanthropist, Albert W. Johnson of Chicago was the first African American to have a General Motors franchise and later became a leading independent Cadillac dealer. He has received numerous recognition awards, including the Entrepreneurship Hall of Fame and Man of the Millennium from the University of Illinois School of Business.

Johnson was born on February 23, 1920, in St. Louis, Missouri, the son of a physician. He received his B.S. degree in business administration from Lincoln University in 1940 and his M.S. degree in hospital administration from the University of Chicago in 1960. He became an assistant administrator of a St. Louis teaching hospital in 1945 and sold automobiles part time. He became known as “the man who sold cars from a briefcase,” since African Americans could not be hired to sell inside a dealership.

Johnson’s persistence in realizing his dream of being a car dealer paid off in 1967. He became the first African American given a General Motors franchise, more than fifteen years after he began petitioning General Motors. He obtained a Cadillac franchise in 1971, and the next year, he became an independent dealer. He sold his companies in 1994 and has devoted his time to civic involvement. Not only was Johnson a founder of the PUSH Foundation and a life member of the NAACP, he has made significant contributions to hospitals, schools, recreational facilities and charitable organizations across the nation.

Johnson has received an honorary doctorate of law from Mary Holmes College and an Honor of Entrepreneurial Excellence from Howard University School of Business Administration. Among his many other affiliations include chairman emeritus of the University of Illinois Center for Urban Business, College for Business Administration; board member of LaRabida Children’s Hospital; member of the Executives Club of Chicago, Ingalls Memorial Hospital, the Better Business Bureau, Chicago Tourism Council, Bellwood Bank, and the General Motors Black Dealer Advisory Board.

Johnson and his wife are the parents of three grown sons.

See how Albert W. Johnson is related to other HistoryMakers
Click Here To Explore The Archive Today!