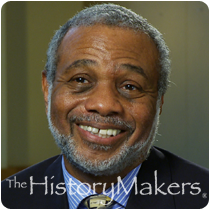 "If you knew the answers, you couldn't call it research."

Chemist and chemistry professor Albert N. Thompson, Jr. was born October 31, 1946 to Martha Furgess Thompson and Albert Thompson, Sr. in Columbia, South Carolina, (Richland County). His mother was an elementary school teacher and his father was a college professor. After attending Savannah Kay Elementary and William Miller Jr. High Schools, Thompson attended and graduated from Phillis Wheatley, Sr. High School in Houston, Texas in 1964. He received his B.S. degree in chemistry and his M.S. degree in inorganic chemistry from Texas Southern University in 1973 and 1975, respectively. Thompson served as an instructor of physical science and chemistry at Houston Community College and Texas Southern University between 1974 and 1975. He earned his Ph.D. degree in inorganic chemistry from Howard University in 1979. He then became an assistant professor of chemistry at Fisk University.

Thompson served as an assistant professor of chemistry at Fayetteville State University in North Carolina. In 1981, he did a faculty research fellowship at the USAF School of Aerospace Medicine at Brooks Air Force Base, Texas before being hired as a professor at Spelman College in Atlanta, Georgia. Thompson served as a visiting professor of chemistry at the University of Wisconsin-Madison in 1990. In 2011, Thompson earned a promotion to chair Spelman College’s Division of Natural Sciences and Mathematics.

Thompson is a member of the American Chemical Society Beta Kappa Chi Scientific Honor Society and the Sigma Pi Sigma Physics Honor Society. He was also featured in an Ebony magazine article on Spelman College. In 2011, he received a distinguished alumni award from the School of Science and Technology at Texas Southern University. Thompson has two children, Amber and Tayloir. He resides in Atlanta, Georgia.

Albert N. Thompson, Jr. was interviewed by The HistoryMakers on March 20, 2012.