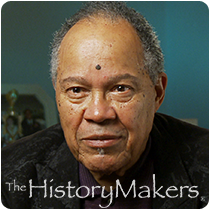 Journalist and media executive Albert Fitzpatrick was born on December 30, 1928 in Elyria, Ohio to Mary and Ben Fitzpatrick. He was the seventh of twelve children. Fitzpatrick developed an interest in journalism in high school, during which he worked part-time as a sports reporter for Elyria’s local newspaper, the Elyria Chronicle-Telegram. He earned his B.A. degree from Kent State University where he studied sociology and journalism. Fitzpatrick also served terms in the U.S. Army and Air Force. He is a veteran of World War II and the Korean War.

In 1956, Fitzpatrick joined the Akron Beacon Journal, where he was the only African American employee in the company. Fitzpatrick was promoted to news editor of the Beacon Journal, where he directed the paper’s Pulitzer Prize winning coverage of the 1970 Kent State shooting. In 1973, Fitzpatrick was named managing editor of the newspaper, making him the first African American to run a major metro newsroom. In 1977, he was named executive editor. Then, after writing a letter to the chairman of Knight-Ridder, Inc. about the lack of diversity in their workforce, Knight-Ridder offered him a job as director of minority affairs. Fitzpatrick worked in that position from 1985 to 1987 and then as vice president of minority affairs, also at Knight-Ridder, from 1987 to 1994. He created diversity programs which enabled Knight-Ridder, which owned forty-five newspapers at that time, to become the top news entity in the country in diversity. Fitzpatrick has since taught classes at Kent State University, was an associate professor and interim chairman at Howard University from 2001 to 2002, and served as a diversity consultant for corporate, government, and non-profit firms.

Fitzpatrick has been a member of a number of professional organizations, including the National Association for Minority Media Executives, where he served as the first chair, and the National Association of Black Journalists (NABJ). He joined the NABJ in 1976, just months after it had been founded, and was elected president in 1985. Fitzpatrick has also been involved in a number of civic and charitable organizations, serving as president of The Coming Together Project and as board member of the Beacon Journal Charity Fund. He is a member of Beta Rho Boule of Sigma Pi Phi, and is a Sigma Delta Chi fellow. Fitzpatrick served two terms as president of the Akron Press during the 1980s, and chaired the United Negro College Fund in Miami, Florida in 1997 and 1998.

Fitzpatrick lives in Akron, Ohio with his wife, Derien Fitzpatrick. Together they have three children: Sharon, Karle, and Albert II. Fitzpatrick also produces three newsletters for his church family and fraternity.

Fitzpatrick was interviewed by The HistoryMakers on February 11, 2014.