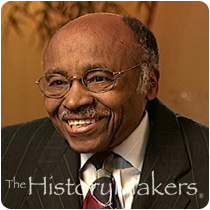 Chemist and chemistry professor Albert Antoine was born in New York, New York, on January 14, 1925. His parents, Wilhelmina Marie and Emmanuel Evans Antoine, were natives of the British West Indies. Antoine received his elementary and secondary school education in the New York Public Schools, having attended P.S. 184, Cooper Junior High School and Townsend Harris High School, where he earned his high school diploma in 1941. He went on to earn his B.S. degree from the City College of New York and his Ph.D. in chemistry from Ohio State University. Before earning his Ph.D., Antoine was drafted into the U.S. Army in 1944 and was trained in the Army Specialized Training Program, where he took courses in civil engineering.

In his early career, Antoine taught chemistry at Clark Atlanta University, in Atlanta, Georgia during the 1953/1954 school year. In 1954, he became a research chemist at the National Advisory Committee for Aeronautics (NACA), the predecessor to the National Aeronautics and Space Administration(NASA). Antoine worked at the NASA Lewis Research Center in Cleveland, Ohio where he researched jet and rocket propulsion, fuel efficiency for aircrafts, alternate fuel sources, batteries, and fuel cells. In 1983, Antoine became a senior research associate for Cleveland State University teaching students at the NASA Lewis Research Center.

Antoine was featured in "Black Contributions to the Engineering and Science Fields at NASA Lewis Research Center" and "Blacks in Science: Astrophysicist to Zoologist" by Hattie Carwell. He was also listed in "American Men of Science". Over the years, his professional activities included service on intergovernmental technical review and technical evaluating committees, membership in the American Chemical Society and publishing and lecturing on his research. Antoine also worked with many public service and non-profit organizations, including the Cleveland International Program, the Council for Careers in Science, the Rotary Club, and the Creative Writing Workshop Projects, which was founded by his wife, June Sallee Antoine.