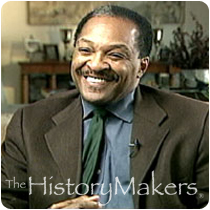 See how Al-Tony Gilmore is related to other HistoryMakers

National educational executive Al-Tony Gilmore was born in Spartanburg, South Carolina. He was raised in the South and in Youngstown, Ohio by his father, an education administrator; and, his mother, a homemaker. Gilmore attended North Carolina Central University and graduated with his B.A. and M.A. degree in American History in 1968 and 1969, respectively. He went on to earn his Ph.D. in United States social history from the University of Toledo in 1972.

In 1972, Gilmore joined the Howard University Department of History as an associate professor of American history. He also worked at the Institute for Services to Education where he developed social science curriculum. In 1978, Gilmore was appointed as professor of history and director of the University of Maryland, College Park Afro-American Studies Program. While there, he pioneered lectures and courses in the history and politics of African American athletes, popular culture, and African American autobiography. In 1982, he was selected as chief consultant for the National African American Museum in Ohio. He later served as a consultant for the National Endowment for the Humanities (NEH), the California State General Assembly, and the U.S. National Archive.

In 1986, Gilmore became the manager and senior program officer for the Leadership, Training and Development Programs at the National Education Association (NEA). He was instrumental to the success of the Minority Leadership Training Program, the Diversity Training Program, and the Women’s Leadership Training program. Gilmore also produced the project titled, “Honoring Our Legacy of Inclusion: The Merger of NEA and the American Teachers Association.” He also served as historian and Archivist Emeritus of NEA, and as a visiting scholar at George Washington University.

Gilmore’s scholarship includes The National Impact of Jack Johnson (1975), Revisiting Blassingame’s The Slave Community (1978), All The People: NEA’s Legacy of Inclusion and Its Minority Presidents (2008), and A Biographical Directory of the Presidents and Executive Directors of NEA and the American Teachers Association (2011). Gilmore also wrote the introduction to The Negro in Sports (2013) by Edwin Bancroft Henderson.

Gilmore’s articles have appeared in Journal of Negro History, Journal of Social History, Journal of American History, The New Republic, The San Francisco Chronicle, and the Washington Post. His contributions to television productions include PBS’s African American Lives (2007), Ken Burns’ Unforgiveable Blackness (2005), and the History Channel’s Crossing the White Line: The Life of Jack Johnson (2001).

Gilmore has served on the board of directors of the Association for the Study of African American Life and History (ASALH) where he served on the board of the Journal of African American History, the Quality Education for Minorities Project (QEM), and the American Historical Association. He has lectured in the United States at Morehouse College, Harvard University, Brown University, Hampton University, and internationally in Germany, Israel, Korea, and Japan

Al-Tony Gilmore was interviewed by The HistoryMakers on November 21, 2003.

See how Al-Tony Gilmore is related to other HistoryMakers
Click Here To Explore The Archive Today!