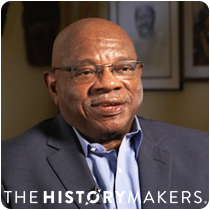 See how Al McFarlane is related to other HistoryMakers

Media executive Al McFarlane was born on September 15, 1947 in Kansas City, Kansas. He attended Morehouse College in Atlanta, Georgia from 1965 to 1966, and the University of Minnesota School of Journalism from 1969 to 1971and graduated from there with his B.A. degree in mass communications.

McFarlane worked as a reporter for the Saint Paul Pioneer Press before moving to General Mills where he worked as the community relations coordinator from 1971 to 1972. He then was hired by the Midwest Public Relations division of Graphic Services as vice president, a position he held from 1973 to 1976. In 1974, McFarlane became editor-in-chief at Insight News, a community newspaper serving African and African American residents of Minnesota. He also established McFarlane Media Interests, Inc., a multimedia marketing and information services firm with newspaper, internet and broadcast properties. McFarlane purchased the rights to Insight News in 1975.

In 1992, McFarlane served as chairman at Minnesota Multicultural Media Consortium, a marketing and advertising sales advisory for Minnesota African & African American, Hispanic, Asian and Native American newspapers. He also was named president of the Black Publishers Coalition, which managed regional and national advertising contracts for Black newspapers and the member group of print media investor-owners in Chicago, Toledo, Detroit, Milwaukee and Minnesota. In 1996, he organized ethnic newspaper owners in the formation of the Minnesota Minority Media Coalition.

In 1997, Insight News initiated a series of public policy forums, “Conversations with Al McFarlane.” McFarlane served as host of the series that aired in partnership with the community radio stations KFAI and KMOJ, in Minneapolis. In 2002, McFarlane worked as president and CEO at Midwest Black Publishers Coalition, Inc. In 2010, McFarlane won a Federal American Recovery and Restoration Act grant that provided the University of Minnesota a $3.7 million grant to create public computing centers in targeted ethnic and urban communities to increase broadband access and awareness. McFarlane also launched Garth McFarlane & Mudd, LLC, a national media buying and promotion firm in 2011. McFarlane was also elected chair of the National Newspaper Publishers Association Foundation Board of Directors from 2015 to 2017.

Al McFarlane was interviewed by The HistoryMakers on June 20, 2018.

See how Al McFarlane is related to other HistoryMakers