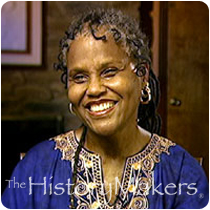 See how Adjoa Aiyetoro is related to other HistoryMakers
Donate Now

Aiyetoro worked as a community mental health specialist from 1970 to 1977. After obtaining her law degree, she served as staff attorney with the Civil Rights Division of the Department of Justice (1978-1982) and then as an attorney with the National Prison Project of the American Civil Liberties Union Foundation (1982-1993). As director of the National Conference of Black Lawyers (NCBL) from 1993 to 1997, she intensified its advocacy efforts and strengthened the organization's fiscal position. Her legal activism within the NCBL has included criminal justice issues, the environmental justice movement, the D.C. statehood movement, and reparations for Africans and African descendants.

A leader in the reparations movement - which seeks acknowledgment that the transatlantic slave trade, slavery and colonialism were crimes against humanity - Aiyetoro is chief legal consultant to the National Coalition of Blacks for Reparations in America (N'COBRA) and co-chairperson of the Reparations Coordinating Committee. She has also represented the Women's International League for Peace and Freedom's UFORJE (United for Racial Justice: Truth, Reparations, Restoration and Reconciliation) campaign. In 2001, she was selected by the African and African Descendants Caucus to contribute to an international presentation and declaration and program of action concerning reparations.

As a visiting professor and scholar in residence at the University of California, Santa Barbara, Aiyetoro focused on chattel slavery and its legacy and taught a seminar on reparations. She is an adjunct professor at Washington College of Law, American University, where she teaches a course on litigating reparations for African Americans. Aiyetoro has served on the board of the National Alliance Against Racist and Political Repression (NAARPR) and the Steering Committee of the National Association of Black Social Workers. She is a popular speaker at international conferences and on national and local television and radio programs. She has testified before Congress and other legislative bodies concerning issues of race, class and gender injustices within the United States.

See how Adjoa Aiyetoro is related to other HistoryMakers
Donate Now
Click Here To Explore The Archive Today!