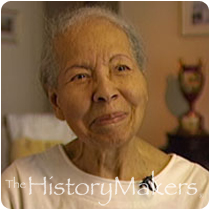 See how Adine Ray is related to other HistoryMakers

Retired teacher Adine Ray devoted herself to raising her family and serving her community. Ray was born on July 4, 1908, in Chicago, Illinois, to Alma, a homemaker, and Andrew, a Pullman porter. Ray spent most of her life in Chicago.

After graduating from high school, Ray attended the University of Chicago until the Great Depression interrupted her studies. She later returned and received her B.S. degree in education in 1935. Soon after, she set out to teach in the Chicago Public Schools. For twenty-five years, Ray taught math, English and social studies to seventh-graders. Her husband, Colonel Marcus H. Ray, was one of the few African American military officers at the time. When he was sent to Germany, Ray and their two children accompanied him.

Upon returning to Chicago, Ray resumed her teaching career. Once her children were grown, she retired and moved to Lausanne, Switzerland, with her husband and lived there seven years, traveling throughout Europe. Ray and her husband moved to the Washington D.C. area in 1976 after the birth of their twin grandsons. They are Ray's only grandchildren. Though retired, Ray worked as a volunteer teacher in local schools. She and her husband had been married fifty-four years at the time of his death.

Ray continued her civic activities well into her nineties, working for a cancer fund in Chicago, and volunteering with the Red Cross. She belonged to several literary clubs and enjoyed going to the symphony and the theater. On January 20, 2008, Ray welcomed her first great-grandson,Taj Samuel Alva Usher, into the world. Ray passed away on February 7, 2008 at the age of ninety nine.

See how Adine Ray is related to other HistoryMakers
Click Here To Explore The Archive Today!