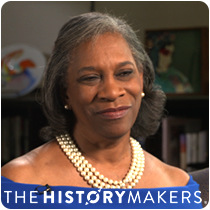 Favorite Color:
Pink
Favorite Food:
Catfish
Favorite Time of Year:
Spring
Favorite Vacation Spot:
Where There Is Water
Favorite Quote:
If It Passes Through My Hands, It Must Be Appreciably Better.

Favorite Color:
Pink
Favorite Food:
Catfish
Favorite Time of Year:
Spring
Favorite Vacation Spot:
Where There Is Water
Favorite Quote:
If It Passes Through My Hands, It Must Be Appreciably Better.

Academic administrator Adena Williams Loston was born on November 13, 1952 in Vicksburg, Mississippi to Frances Pearline Miller Williams and Tommie Lee Williams, Sr. Loston received her B.S. degree from Alcorn State University in Claiborne County, Mississippi in 1973. She then earned both her M.S. degree in education and her Ph.D. degree in education administration and supervision from Bowling Green University in Bowling Green, Ohio in 1974 and 1979, respectively. She also completed postgraduate work at the University of Pennsylvania’s Wharton Business School, Oxford University, and Harvard University.

Loston began her career in education as an instructor at Arkansas State University in 1974. Later, she taught as an adjunct professor at the University of Houston from 1980 to 1981, as an instructor at Houston Community College from 1979 to 1981, an adjunct assistant professor at Texas Southern University from 1984 to 1986, and an associate professor at Georgia State University 1988 to 1989. Loston also supervised the office occupations program at Houston Community College from 1982 to 1988. In 1989, Loston began working at Santa Monica College in California as the dean of professional programs; and she also served as its dean of vocational education, budgets, and facilities from 1989 to 1993. Loston then served as the executive dean and provost of the El Paso County Community College District at the Transmountain and Valle Verde campuses. From 1997 to 2002, Loston was the president of San Jacinto College South in Houston. She became the chief education officer associate administrator at NASA headquarters in Washington, D.C. in 2002, and later served as director of education and special assistant for suborbital and special orbital projects at the Goddard Space Flight Center in 2005. In 2007, Loston was appointed as president of St. Philip’s College in San Antonio, Texas.

Loston received numerous awards and accolades over the course of her career, including NASA’s Outstanding Leadership Medal and Exceptional Achievement Medal, the Daisy Bates Education Advocacy Award from the NAACP, and the W.E.B. DuBois Higher Education Award from the National Alliance of Black School Educators. She was also the recipient of an honorary doctorate in science from Wiley University, and was inducted into the San Antonio Women’s Hall of Fame in 2009. In 2010, Loston became an advisory board member of the Historically Black Colleges and Universities Financing Advisory Board. She also served on the American Council on Educational Inclusion Commission. Loston as NASA’s chief education officer was responsible for the Educator Astronaut Program, the NASA Explorer Schools and NASA Explorer Institutes.

Adena Williams Loston was interviewed by The HistoryMakers on June 4, 2018.