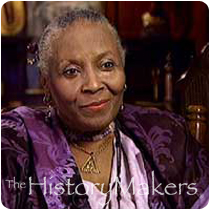 See how Adelaide Sanford is related to other HistoryMakers

Educator Adelaide L. Sanford was born in Brooklyn on November 27, 1925. Sanford studied at Brooklyn College, where she earned her B.Ed. degree in 1947; she received her M.Ed. degree from Wellesley College three years later. From 1950 to 1965, Sanford taught in New York's elementary schools, before being hired as an assistant principal. Sanford earned her Ph.D. degree from Fordham University in 1967, and later became principal at Crispus Attucks School in Brooklyn, earning an outstanding reputation for promoting excellence and achievement at an inner-city school.

In 1986, Sanford won unanimous election to the Board of Regents of the State University of New York. As chairperson of the Regents' Committee on Low Performing Schools, Sanford played an instrumental role in shaping new educational policies that sought to close the gap among schools in student performance. Though outspoken and known for her African-style dress and Ebonics commentary, Sanford never wavered in her concern for the welfare of New York's students, particularly those at low-performing schools. While serving as a regent, Sanford also taught at Baruch College and Fordham University.

Many honors and awards were bestowed upon Sanford for her work; she received the Congressional Black Caucus Foundation's humanitarian award, and distinguished alumna awards from Wellesley College and Brooklyn College. Sanford played an instrumental role in creating the John Henrick Clark meetinghouse. Sanford also served on the board of the Upper Manhattan Empowerment Zone, and as a national advisory board for multicultural education. Sanford and her husband, Jay, were married in 1955; the couple raised two children.

See how Adelaide Sanford is related to other HistoryMakers
Click Here To Explore The Archive Today!