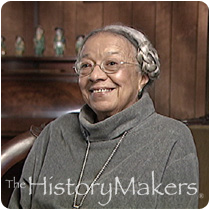 See how Adelaide Cromwell is related to other HistoryMakers
Donate Now

Boston University professor emeritus Adelaide McGuinn Cromwell was born on November 27, 1919, in Washington, D.C. In 1936, Cromwell graduated from Dunbar High School and in 1940, went on to earn an A.B. degree in sociology from Smith College. One year later, she earned a M.A. degree in sociology from the University of Pennsylvania and went on to earn a certificate in social casework from Bryn Mawr College. After earning a Ph.D. in sociology from Harvard’s Radcliffe College in 1946, she became the first African American instructor at Hunter College in New York and then at her alma mater, Smith College.

In 1960, Cromwell convened the first conference of West African social workers in Ghana. That same year, she was the only woman and African American appointed to a five-member committee commissioned by the Methodist Church in America to assess the state of higher education in what was then called the Belgian Congo. In 1983, Cromwell convened a conference of African American scholars and policymakers at the University of Liberia in Monrovia in 1983.

Cromwell has been recognized by a broad community of educators, administrators, and policymakers. She was appointed to the executive council of the American Society of African Culture, the American Negro Leadership Conference in Africa and the advisory council on Voluntary Foreign Aid. She maintains active membership in the Council on Foreign Relations, the African Studies Association, the Association for the Study of African American Life and History (ASALH) and the American Sociological Association.

Cromwell has been recognized for her outstanding contributions to academia with awards and honors that include a Citation from the National Order of Cote d’Ivoire, the Smith College Medal, and the Carter G. Woodson Medal from ASALH.

Cromwell is the author of significant books and articles and is the mother of one son, Anthony Cromwell Hill. In retirement, her current research is on the history of her family as black intellectuals.

See how Adelaide Cromwell is related to other HistoryMakers
Donate Now
Click Here To Explore The Archive Today!