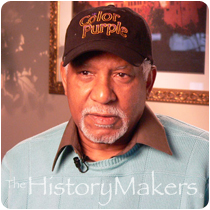 Favorite Color:
Green
Favorite Food:
Creamed Cauliflower
Favorite Time of Year:
Summer
Favorite Vacation Spot:
Jamaica
Favorite Quote:
Making Money Is A Habit And There's Nothing I Can Do About It.

Favorite Color:
Green
Favorite Food:
Creamed Cauliflower
Favorite Time of Year:
Summer
Favorite Vacation Spot:
Jamaica
Favorite Quote:
Making Money Is A Habit And There's Nothing I Can Do About It.

See how Adam Wade is related to other HistoryMakers
Donate Now

Adam Wade was born Patrick Henry Wade on March 17, 1935 in Pittsburgh, Pennsylvania, to Pauline Simpson and Henry Oliver Wade, Jr. Wade was raised by his grandparents in Pittsburgh’s East Liberty neighborhood and graduated from Westinghouse High School in 1952. He went on to attend Virginia State College, but married his high school sweetheart and soon left school in order to support his young family.

Wade started singing while still in high school. In 1958, he got his first opportunity to record for the Coed Records label in New York City. Two years later, he moved to New York full-time, and within six months, he was singing at the city’s most prestigious club, the Copacabana. Wade’s first hit, “Ruby,” was released that same year. He had three top ten singles in 1961: “Take Good Care of Her,” “The Writing on the Wall” and “As If I Didn’t Know.” Wade had less success after moving over to Epic Records later that year. In the late 1960s, he shifted his focus to acting. Wade began doing commercials and voice-over work. In 1970, he starred in the film Wanderlove. Wade had a number of supporting roles in films in the early 1970s, and he began to be featured on television, in soaps like The Guiding Light and black-oriented sitcoms like Sanford & Son and Good Times.

In 1975, Wade began hosting the television game show Musical Chairs, becoming the first black game show host. In 1978, he restarted his recording career. Wade also starred in an all-black production of Guys and Dolls in Las Vegas, Nevada. In 1983, Wade and his wife, Jeree Wade, started their own production company called SONGBIRD’S UNLIMITED PRODUCTIONS. They have produced many African American historical revues, including the off Broadway musical, Shades of Harlem which opened at the Village Gate in New York in 1983 and recently stopped touring in 2005. In the 1980s and 1990s, Wade continued to appear regularly on stage and screen including an episode of Hill Street Blues. In April of 2007, Wade began the national tour of the hit Broadway play, The Color Purple, playing the role of “Old Mister Johnson”. Wade has also taken turns as a director, writer and producer. He has received Audelco and Clio Awards for his work.

Over forty years after leaving college, Wade returned to school, earning his B.A. degree from Lehman College and his M.A. degree from Brooklyn College. He works as an adjunct professor of speech and theater at Long Island University and Bloomfield College.

Wade has been married to his wife, Jeree, for twenty-five years.

Adam Wade was interviewed by The HistoryMakers on April 27, 2007.

See how Adam Wade is related to other HistoryMakers
Donate Now
Click Here To Explore The Archive Today!