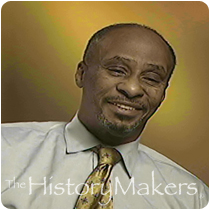 See how Acel Moore is related to other HistoryMakers

Pulitzer Prize winning newspaper columnist Acel Moore was born on October 5, 1940, in Philadelphia, Pennsylvania. Moore attended Settlement Music School from 1954 to1958. Moore served in the United States Army until 1962 and attended the Charles Morris Price School of Advertising and Journalism from 1964 to 1966.

Moore began his career with the Philadelphia Inquirer as a copy clerk in 1962; in 1964, he became an editorial clerk, and from 1968 to 1981, he worked as a staff writer. In 1970, Moore won the Pennsylvania Bar Association’s Scale of Justice Award for his series on the juvenile court system. In 1974, Moore and Reggie Bryant hosted a television show called Black Perspectives on the News on Philadelphia’s WHYY public television. In 1977, Moore won the Pulitzer Prize for local investigative reporting for his series on abuse of inmates at Fairview State Hospital. From 1980 to 1989, Moore served on the faculty at the University of California at Berkeley and administered the school’s summer program for minority journalists; he was also a journalism instructor at Temple University and Florida A&M University, in addition to being a journalism consultant to Northwestern University, Duquesne University, University of Kansas and Norfolk State University.

Moore lectured at several colleges and universities around the country; wrote prolifically; and directed recruitment, training, and staff development for the Philadelphia Inquirer where he was associate editor and a member of the editorial board. Moore won the Public Service Award from the Society of Professional Journalism in 1971 and an award from the Pennsylvania Associated Press Managing Editors Association in 1974. A founder of the National Association of Black Journalists (NABJ) in 1975, Moore was honored with the NABJ 2005 Legacy Award. In 1979, Moore established the Art Peters Fellowship Program, a copy editor internship that launched the careers of over fifty minority journalists. In 1984, Moore created the Journalism Career Development Workshop that trained dozens of Philadelphia high school students; the program was later renamed in Moore’s honor. Moore retired from the Philadelphia Inquirer in 2005, after forty years in their employment; after his retirement, he continued to speak at various special occasions and academic settings, and to write.

Moore was interviewed by The HistoryMakers on August 5, 2005.

See how Acel Moore is related to other HistoryMakers
Click Here To Explore The Archive Today!