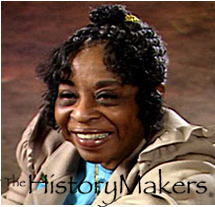 See how Abena Joan P. Brown is related to other HistoryMakers
Donate Now

Abena Joan P. Brown was born on the South Side of Chicago. Brown was one of those rare individuals who was not only passionate about the creative arts, but also shrewd enough to see the need for organization. Over the years, Brown distinguished herself as a masterful businesswoman as well as an artist. With over one hundred-fifty professional theater productions to her credit, in addition to a Master's degree in Community Organization and Management from the University of Chicago, Brown was the driving force behind the 1971 creation of the eta Creative Arts Foundation, the only African American full service cultural arts collective in Chicago and the nation.

Her many honors included an Award of Merit from the Black Theater Alliance, The Paul Robeson Award from the Chicago African American Arts Alliance, the Governor's Award in the Arts and the Lifetime Achievement Award from the Joseph Jefferson Committee. Brown was also cited as one of America's Top Business and Professional Women by Dollars and Sense magazine, and she was inducted into the Women's Hall of Fame of Chicago in 1991. Always looking towards the future, Brown was committed to building eta Creative Arts Foundation. Her goal was to always provide a venue where the stories of African American people will be told "in the first voice" for generations to come.

See how Abena Joan P. Brown is related to other HistoryMakers
Donate Now
Click Here To Explore The Archive Today!