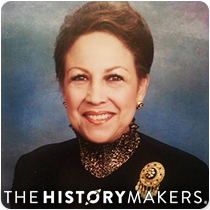 See how Aaronetta Pierce is related to other HistoryMakers

From 1964 to 1967, Pierce taught in the San Antonio Independent School District in San Antonio, Texas, before she moved to Germany for three years. In the 1970s, Pierce began volunteering in the San Antonio community. In 1980, she joined the docent corps at the San Antonio Museum of Art as well as the board of the San Antonio Museum Association. In 1983, she also became active with the incorporation of the Southwest Ethnic Arts Society. In 1985, Governor Mark W. White, Jr. appointed Pierce as the first Black woman to serve on the Texas Commission on the Arts. San Antonio Mayor Henry Cisneros selected Pierce to chair the founding Martin Luther King City/County Commission, which planned and executed the city’s inaugural Martin Luther King Jr. Day celebrations in 1986. Two years later, Mayor Cisneros appointed Pierce chair of the San Antonio Blue Ribbon Committee on the Arts. The committee’s report led to the creation of the San Antonio Department of Arts and Cultural Affairs. In 1990, Pierce and her husband founded Premier Artworks, Inc. to promote the work of African American artists and authors across the country.

Pierce has been recognized at the municipal and state level. In 1984, she was inducted into the San Antonio Women’s Hall of Fame, and in 1993, she was inducted into the Texas Women’s Hall of Fame. The United Communities of San Antonio, Inc. awarded Pierce its Humanitarian Award, which recognizes individuals who promote understanding and respect among all races, religions and cultures, in 2007. In addition to holding long term membership in The Links, Incorporated and Alpha Kappa Alpha Sorority, Inc., Pierce served on boards for numerous organizations including Fisk University, the San Antonio Performing Arts Association, and the San Antonio Museum of Art.

Aaronetta Pierce was interviewed by The HistoryMakers on June 8, 2018.

See how Aaronetta Pierce is related to other HistoryMakers