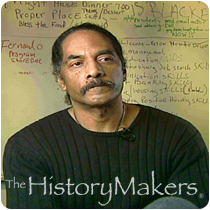 See how Aaron Dixon is related to other HistoryMakers

Political activist Aaron Lloyd Dixon was born on January 2, 1949 in Chicago, Illinois to Frances Sledge Dixon and Elmer James Dixon. The Dixons were leftist activists and valued the importance of fighting social injustice. Dixon moved to Seattle, Washington in 1958, when his father accepted a job as a technical illustrator for the United States Air Force. In 1961, at age eleven, Dixon walked alongside Dr. Martin Luther King Jr., in his march to end housing discrimination in Seattle. He attended Coleman Elementary School, Blaine Junior High School and in 1963, became one of the first African American youth to integrate predominantly white Queen Anne High School.

In 1967, Dixon attended Washington University and joined the local SNCC chapter. As a member of SNCC, Dixon met the black radical Larry Gossett, and co-founded the Seattle Area Black Student Union (SABSU). As members of the SABSU, Dixon, Gossett, and Dixon’s younger brother, Elmer, promoted self determination, self-respect and self defense throughout Seattle’s black community. In 1968, after attending funeral services in Oakland, California for seventeen-year-old Bobby Hutton, a founding member of the Black Panther Party that was shot down by Oakland police, Dixon, Gossett, and others established the Seattle chapter of the Black Panther Party. As founding member and captain of the Seattle chapter of the Black Panther Party, Dixon helped launch the Free Breakfast for School Children Program, which fed over 10,000 children every day before school. Dixon was also instrumental in the opening of a free medical and legal clinic.

In 2002, Dixon founded the non-profit organization, Central House, to provide transitional housing for homeless young adults. Central House currently contains a youth leadership project that teaches youth to think positively, graduate high school and to control their destinies. In 2006, the Green Party of Washington nominated Dixon for the U.S. Senate. Following his campaign for U.S. Senate, Dixon organized the Center for Social Justice based out of the Seattle Central District. The Center for Social Justice organized an anti-war rally and march in January 2007.

Dixon was interviewed by The HistoryMakers on October 24, 2007.

See how Aaron Dixon is related to other HistoryMakers
Click Here To Explore The Archive Today!