A Night With Bernard Harris

A Night With Bernard Harris offered a fascinating, intimate look at a scientist, philanthropist, and trailblazer.  Dr. Bernard Harris, Jr. was the first African American to complete a spacewalk for NASA.  NPR Correspondent Corey Dade interviewed Harris about his life and work in this live-to-tape PBS-TV presentation. 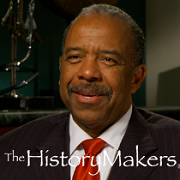 Astronaut, medical scientist, and management executive Dr. Bernard Harris, Jr. was born on June 26, 1956, in Temple, Texas.  He graduated from the University of Houston in 1978 with his B.S. degree in biology and subsequently the Texas Tech University Health Science Center of Medicine with his M.D. degree in 1982.  Harris completed his residency at the Mayo Clinic and then pursued research opportunities at Ames Research Center and the Lyndon B. Johnson Space Center.  After he was selected to become an astronaut, Harris made flights into space in 1993 and 1995.  On his second flight, he became the first African American to walk in space.  Harris then went on to become an entrepreneur, working as vice president of Spacehab, Inc. and later as director of Versalius Ventures.  Harris was the recipient of the 2000 Horatio Alger Award. The Dr. Bernard A. Harris Middle School was named in his honor in 2006. 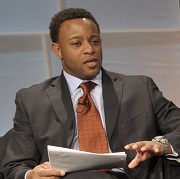 Corey Dade was a national correspondent for the NPR Digital News team. With more than fifteen years of journalism experience, he wrote news analysis about federal policy, national politics, social trends, cultural issues and other topics for NPR.org. Prior to NPR, Dade served as the Atlanta based southern politics and economics reporter for The Wall Street Journal for five years. During that time he covered many of the nation's biggest news stories, including the BP oil spill, the Tiger Woods scandal and the 2008 presidential election, having traveled with both the Obama and McCain campaigns. He also covered the 2007 Virginia Tech shooting and Hurricane Katrina, which led to a nine month special assignment in New Orleans.