Through personal narration, archival photos and news clips, An Evening With Vernon Jordan traced Jordan’s path from his civil rights activism in the South through his leadership of the National Urban League in the 1980s to his chairmanship of the Clinton presidential transition team. Advice on mentoring and leadership were interwoven throughout. Entertaining and enlightening, An Evening With Vernon Jordan was a night not to be forgotten! 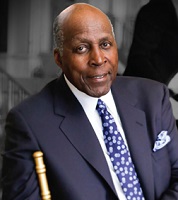 Vernon Jordan was a Senior Managing Director of Lazard Frères & Co. LLC in New York where he worked with a diverse group of clients across a broad range of industries. Prior to joining Lazard, Jordan was a Senior Executive Partner with the law firm of Akin Gump Strauss Hauer & Feld, LLP, where he remains Senior Counsel. While there Mr. Jordan practiced general, corporate, legislative and international law in Washington, D.C.

Jordan is a graduate of DePauw University and the Howard University School of Law. He holds honorary degrees from more than sixty American colleges and universities. He is a member of the Bars of Arkansas, the District of Columbia, Georgia and the U.S. Supreme Court. He is a member of the American Bar Association, the National Bar Association, the Council on Foreign Relations and The Bilderberg Meetings.

Jordan is the author of Vernon Can Read! A Memoir and Make It Plain, Standing Up and Speaking Out.