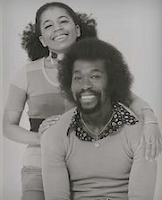 Legendary songwriters and performers, Ashford & Simpson rank among the most acclaimed and admired creative couples in contemporary music. They received numerous awards and honors, including the Founder's Award from the American Society of Composers And Publishers (ASCAP) and the Pioneer Award from the prestigious Rhythm & Blues Foundation. In 2002, the duo was inducted into the Songwriters Hall of Fame.

Nick Ashford met Valerie Simpson in 1964 at Harlem's White Rock Baptist Church, where they both sang in the choir. After their breakthrough composition for Ray Charles, “Let’s Go Get Stoned,” became a major hit in 1966, Ashford & Simpson went on to become one of Motown’s most successful songwriting teams, penning numerous hits for Marvin Gaye and Tammie Terrell, including classics like "Ain't No Mountain High Enough," "Your Precious Love," "Ain't Nothing Like the Real Thing," "You're All I Need to Get By." The duo later helped launch Diana Ross’ solo career with hits like "Reach Out and Touch (Somebody's Hand)" and "The Boss."

In 1973, Ashford & Simpson signed with Warner Bros. Records. launching their own recording and performing career. Between 1973 and 2011, they released sixteen albums, including unforgettable hits such as "Send It," "It Seems to Hang On," "Love Don't Make it Right," "Is It Still Good to Ya," "Found a Cure," "Street Corner," "Highrise” and of course, "Solid," which topped the R&B chart in 1984 and crossed over to number twelve on the pop singles chart. Seven of Ashford & Simpson’s albums were recorded with the help of musical director/arranger Ray Chew. On the road, Ashford & Simpson thrilled crowds with their exhilarating concert appearances, choreographed by Tony Award-winning George Faison. Throughout their own performing career, Ashford & Simpson continued writing and producing for other artists, including Ben E. King, Gladys Knight and the Pips, Chaka Khan and Quincy Jones.