An Evening With Valerie Jarrett

View in the digital archive
Purchase a DVD

An Evening With Valerie Jarrett was a live-to-tape, one-on-one interview with Senior Presidential Advisor Valerie Jarrett conducted by veteran NPR journalist Michele Norris. Taped on Saturday, April 9, 2016 at The Art Institute of Chicago, the program featured archival photos, news clips and videotaped appearances by Jarrett’s family and colleagues as well as a special appearance by President Barack Obama. First Lady Michelle Obama was in attendance.

An Evening With Valerie Jarrett was the twenty-fourth program in The HistoryMakers’ signature An Evening With series. Beginning with an overview of Jarrett’s impressive family history, the interview moved into a conversation about Jarrett’s political career in Chicago during the Harold Washington and Richard M. Daley mayoral administrations. Jarrett recalled first meeting the Obamas and reflected on the development of their relationship, all the way to the White House. An Evening With Valerie Jarrett thrilled the audience with stories of resilience, compassion and courage. 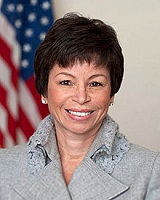 Valerie B. Jarrett was a Senior Advisor to President Barack Obama. She oversaw the Offices of Public Engagement and Intergovernmental Affairs and chaired the White House Council on Women and Girls.

Jarrett worked throughout her tenure at the White House to mobilize elected officials, business and community leaders, and diverse groups of advocates behind efforts to strengthen and improve access to the middle class, to boost American businesses and our economy, and to champion equality and opportunity for all Americans. From ongoing campaigns to end sexual assault, raise the minimum wage, advocate workplace policies that empower working families, and promote entrepreneurship and early childhood education, Jarrett helped the President develop a broad coalition of partners to execute a robust agenda. And working with a broad range of partners, Jarrett helped lead efforts to economically and politically empower women here in the United States and around the world.

Jarrett came to the White House with a background in both the public and private sectors, having served as the Chief Executive Officer of The Habitat Company in Chicago, Chairman of the Chicago Transit Board, Commissioner of Planning and Development, and Deputy Chief of Staff for Chicago Mayor Richard M. Daley. She also served as the director of corporate and not-for-profit boards including Chairman of the Board of the Chicago Stock Exchange, Chairman of the University of Chicago Medical Center Board of Trustees, and Director of the Federal Reserve Bank of Chicago.

Jarrett received her B.A. from Stanford University in 1978 and her J.D. from the University of Michigan Law School in 1981.

Michele Norris is one of the most respected voices in American journalism. She leads the The Race Card Project, an initiative to foster a wider conversation about race in America that she created after the publication of her 2010 family memoir, The Grace of Silence.

Most recently, Norris was a host on NPR’s All Things Considered, where she informed, engaged and enlightened listeners with thoughtful interviews and in-depth reporting. Norris has interviewed world leaders, Nobel laureates, Oscar winners, American presidents, military leaders, influential newsmakers and even astronauts traveling in outer space. She is known for her approachable interviewing style that is both relaxed and rigorous. In addition to this deep reporting, Norris regularly interviews newsmakers, from politicians to prominent individuals such as Representatives James Clyburn (D-SC), Paul Ryan (R-WI) and First Lady Michelle Obama. Before joining NPR in 2002, Norris spent almost ten years as a reporter for ABC News in the Washington Bureau. She has also worked as a staff writer for The Washington Post, Chicago Tribune and the Los Angeles Times.

Norris has received numerous awards for her work. In 2009, she was named Journalist of the Year by the National Association of Black Journalists. The NABJ recognized Norris for her body of work, in addition to her coverage of the 2008 presidential campaign, when she moderated a series of candid conversations with voters on the intersection of race and politics. That series earned Norris and Morning Edition Host Steve Inskeep an Alfred I. DuPont Columbia University Award for excellence in broadcasting.

Norris was honored with NABJ’s 2006 Salute to Excellence Award, for her coverage of Hurricane Katrina; the University of Minnesota’s Outstanding Achievement Award; and the 1990 Livingston Award for a series about a six-year-old who lived in a crack house. Norris earned both an Emmy Award and Peabody Award for her contribution to ABC News’ coverage of 9/11.