An Evening With Richard Parsons

An Evening With Richard Parsons

This hour-long, one-on-one interview program showcased the life and career of corporate giant, Richard Parsons. Taped live in Washington, D.C. on the campus of The George Washington University at the Jack Morton Auditorium on Saturday, November 15, 2008, this program was the fifteenth in The HistoryMakers’ An Evening With... series. CNN journalist Soledad O’Brien served as the program’s interviewer.

Born in New York, Parsons went on to become Chairman and CEO of Time Warner, before assuming the chairmanship of Citigroup. The interview covered Parsons’ childhood, the extensive impact his mentor, Nelson Rockefeller, had on him and his legal and business careers. The life of Richard Parsons is an example that businessmen and women look to for guidance and aspire to become.

Richard Parsons is former Chairman of Citigroup and Time Warner, whose businesses include filmed entertainment, interactive services, television networks, cable systems and publishing. From May 2002 to December 2007, Parsons served as Time Warner’s Chief Executive Officer. He became Chairman of the Board in May 2003.

As CEO, Parsons led Time Warner’s turnaround and set the company on a solid path toward achieving sustainable growth. In the process, he put in place the industry’s most experienced and successful management team, strengthened the company’s balance sheet, simplified its corporate structure, and carried out a disciplined approach to realigning the company’s portfolio of assets to improve returns. In its January 2005 report on America’s Best CEOs, Institutional Investor magazine named Parsons the top CEO in the entertainment industry.

Mr. Parsons joined Time Warner as its President in February 1995. As President, he oversaw the company’s filmed entertainment and music businesses as well as all corporate staff functions, including financial activities, legal affairs, public affairs and administration.

Prior to becoming President of Time Warner, Parsons was Chairman and Chief Executive Officer of Dime Bancorp, Inc., one of the largest thrift institutions in the United States. Previously, he was the managing partner of the New York law firm Patterson, Belknap, Webb & Tyler. Prior to that, he held various positions in state and federal government, as counsel for Nelson Rockefeller and as a senior White House aide under President Gerald Ford. Parsons received his undergraduate education at the University of Hawaii and his legal training at Union University’s Albany Law School.

Parsons co-chaired the Mayor’s Commission on Economic Opportunity in New York City during Mayor Michael Bloomberg's administration. He is Chairman Emeritus of the Partnership for New York City and Chairman of the Apollo Theater Foundation. Parsons has served on the boards of Howard University, the Museum of Modern Art, the American Museum of Natural History, and Citigroup. He continues to serve on the board of the Estee Lauder Companies. 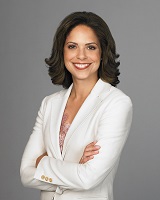 Soledad O’Brien is an anchor and reporter for CNN Special Investigations Unit, reporting hour-long documentaries throughout the year and filing in-depth series on the most important ongoing and breaking news stories for all major CNN programs. She also covers political news as part of CNN’s “Best Political Team on Television.”

O’Brien joined CNN in July 2003 as the co-anchor of the network’s flagship morning program, American Morning, and distinguished herself by reporting from the scene on the transformational events that broke on her watch. Her efforts following Hurricane Katrina and the tsunami in Phuket, Thailand, earned her numerous awards and critical acclaim.

O’Brien came to CNN from NBC News where she had anchored the network’s Weekend Today since July 1999. Before Weekend Today, O’Brien anchored MSNBC’s award-winning technology program The Site. O’Brien joined NBC News in 1991 and was based in New York as a field producer for Nightly News and Today. Before her time at NBC, she served three years as a local reporter and bureau chief for the NBC affiliate KRON in San Francisco. She began her career as an associate producer and news writer at the then-NBC affiliate, WBZ-TV in Boston.